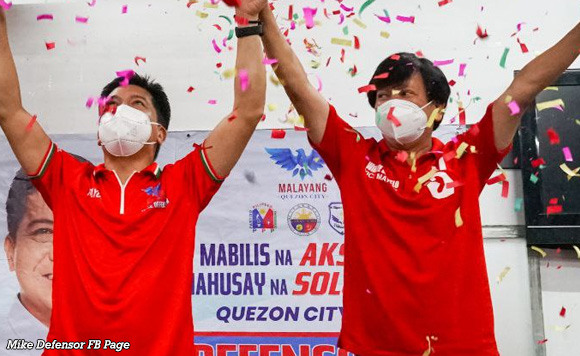 0 980
Share
Want more POLITIKO News? Get the latest newsfeed here. We publish dozens and dozens of politics-only news stories every hour. Click here to get to know more about your politiko - from trivial to crucial. it's our commitment to tell their stories. We follow your favorite POLITIKO like they are rockstars. If you are the politiko, always remember, your side is always our story. Read more. Find out more. Get the latest news here before it spreads on social media. Follow and bookmark this link. https://goo.gl/SvY8Kr

Quezon City mayoral candidate Mike Defensor and his vice mayoral running mate Winnie Castelo have maintained their lead over their rivals in the upcoming elections.

Based on the survey conducted by The Issues and Advocacy Center from March 7-13, Defensor had a voter preference of 52% while his rival incumbent Mayor Joy Belmonte’s 37%, a 15-point margin.

Defensor and Castelo are advocating for a responsive, proactive, transparent, and caring city government if they get elected.

The candidates for the congressional posts under the Defensor-Castelo tandem were also ahead of their opponents.

In the first district, reelectionist Rep. Onyx Crilosogo had 54% against Juan Carlos Atayde’s 29%.

In the third district, reelectionist Rep. Allan Benedict Reyes was picked by 52% against Franz Pumaren’s 32%.

In the sixth district, former congressman Bingbong Crisologo was preferred by 51% while Marvic Co-Pilar had 35%.