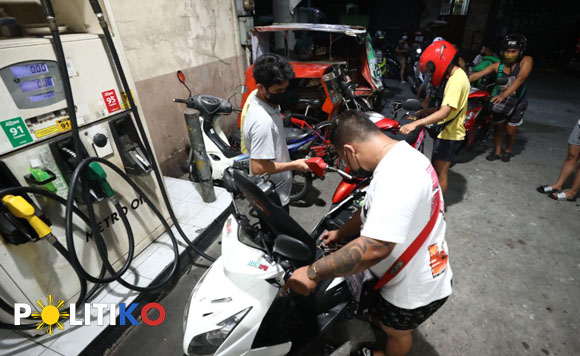 0 262
Share
Want more POLITIKO News? Get the latest newsfeed here. We publish dozens and dozens of politics-only news stories every hour. Click here to get to know more about your politiko - from trivial to crucial. it's our commitment to tell their stories. We follow your favorite POLITIKO like they are rockstars. If you are the politiko, always remember, your side is always our story. Read more. Find out more. Get the latest news here before it spreads on social media. Follow and bookmark this link. https://goo.gl/SvY8Kr

Castelo said “the temporary suspension of oil taxes will provide our people instant relief from soaring fuel prices. It will benefit all sectors.”

Suspending the excise tax means that prices could decrease by P10 per liter for gasoline, P6 per liter for diesel, and P3 per kilogram for liquefied petroleum gas or P33 per 11-kilogram cylinder.

The reduction in the cost of fuel would have a similar domino effect on the prices of goods and services, Castelo added.

The Department of Finance (DOF) is opposed to the proposed suspension of fuel taxes and is for continued targeted assistance to certain vulnerable groups.

Castelo said she would support a proposal to approve a bill that provides for an automatic tax suspension mechanism whenever the cost of crude oil in the world market breaches $80 per barrel.

She also urged Duterte to call Congress to a special session to approve such measure “in a few hours, since it is a simple, uncomplicated proposal.”

“If such legislation were in place, fuel taxes would have been suspended because the cost of crude has already shot up to $130 per barrel due to Russia’s invasion of Ukraine,” she said.