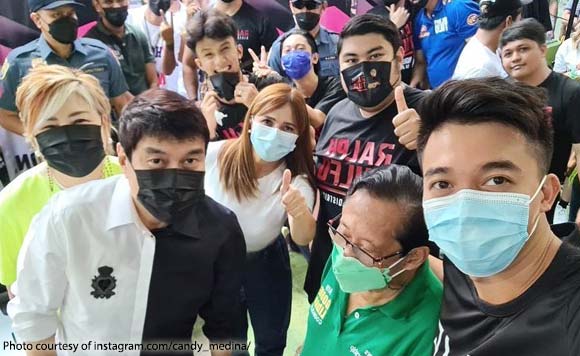 0 129
Share
Want more POLITIKO News? Get the latest newsfeed here. We publish dozens and dozens of politics-only news stories every hour. Click here to get to know more about your politiko - from trivial to crucial. it's our commitment to tell their stories. We follow your favorite POLITIKO like they are rockstars. If you are the politiko, always remember, your side is always our story. Read more. Find out more. Get the latest news here before it spreads on social media. Follow and bookmark this link. https://goo.gl/SvY8Kr

Quezon City councilor Candy Medina had the chance to get up close and personal with the family of senatorial candidate Raffy Tulfo when they visited Barangay Commonwealth earlier this week.

In an Instagram post, Medina shared a photo she took with Raffy, his wife, ACT-CIS party-list Rep. Jocelyn Tulfo, and their son Ralph, who’s running for congressman of Quezon City’s second district.

Aside from visiting the community, the Tulfos and Medina attended the oath taking of a local group called KAKAMPI.

“KAKAMPI Oath taking at Gold Street, Barangay Commonwealth organized and sponsored by Cong. @ralph.tulfo with Future Senator Raffy Tulfo, Cong. @jocelyntulfo, Councilor @davevalmocina and Coun Godie Liban which aims to promote peace and unity among our ka-Barangay of District 2, QC,” Medina said in the caption of her post.

Raffy has been proactive in helping his son campaign in hopes of clinching a House seat.