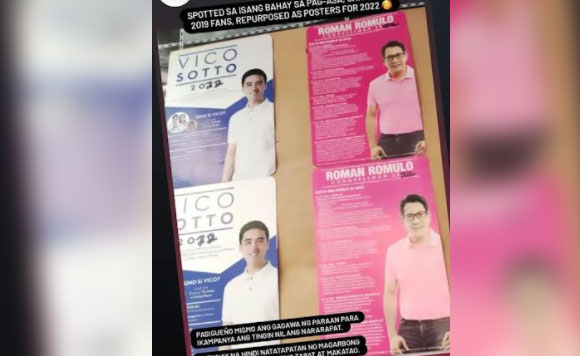 0 1,230
Share
Want more POLITIKO News? Get the latest newsfeed here. We publish dozens and dozens of politics-only news stories every hour. Click here to get to know more about your politiko - from trivial to crucial. it's our commitment to tell their stories. We follow your favorite POLITIKO like they are rockstars. If you are the politiko, always remember, your side is always our story. Read more. Find out more. Get the latest news here before it spreads on social media. Follow and bookmark this link. https://goo.gl/SvY8Kr

Some supporters of Pasig Mayor Vico Sotto and Rep. Roman Romulo are repurposing campaign materials from the 2019 elections as the two politikos seek reelection.

In an Instagram story, Sotto shared a photo showing fans he and Romulo gave away during the 2019 campaign period.

The year, however, has been changed by a supporter using a permanent marker from 2019 to 2022.

A bemused Sotto explained that the supporter repurposed his and Romulo’s old campaign material because they have yet to give away new ones.

“Alam niyo naman na never ako nagpakabit ng tarp bago mag official campaign period. No judgment to candidates who do, but this has been my stand ever since,” Sotto added.

The campaign period for local politikos will start on March 25.