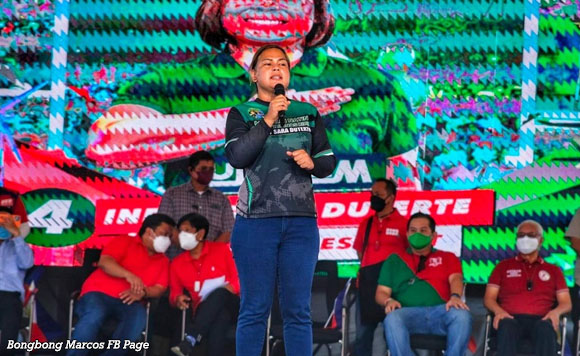 0 210
Share
Want more POLITIKO News? Get the latest newsfeed here. We publish dozens and dozens of politics-only news stories every hour. Click here to get to know more about your politiko - from trivial to crucial. it's our commitment to tell their stories. We follow your favorite POLITIKO like they are rockstars. If you are the politiko, always remember, your side is always our story. Read more. Find out more. Get the latest news here before it spreads on social media. Follow and bookmark this link. https://goo.gl/SvY8Kr

UniTeam presidential candidate Ferdinand Marcos, Jr. and vice presidential aspirant Sara Duterte will get at least 70% of the votes in Caloocan City in the upcoming elections.

Caloocan City Rep. Dale Malapitan made this commitment on Friday during the inauguration of the UniTeam headquarters in Camarin district, which was attended by Duterte, Caloocan Mayor Oscar Malapitan, Valenzuela City Mayor Rex Gatchalian, and Speaker Lord Allan Velasco.

“We will work hard to deliver seventy percent of Caloocan votes to BBM-Sara UniTeam,” said Rep. Malapitan who is running for mayor.

Rep. Malapitan said the UniTeam is receiving broad support from Caloocan because the city received resources that it needed to help its constituents from the national government being led by President Rodrigo Duterte.

It was the second time the UniTeam visited Caloocan City in two weeks.

On February 19, Marcos and Duterte went around the city before holding a grand rally, during which Mayor Malapitan endorsed the UniTeam candidates.

During the first visit, Mayor Malapitan said half of the city went out to show support to Marcos and Duterte.