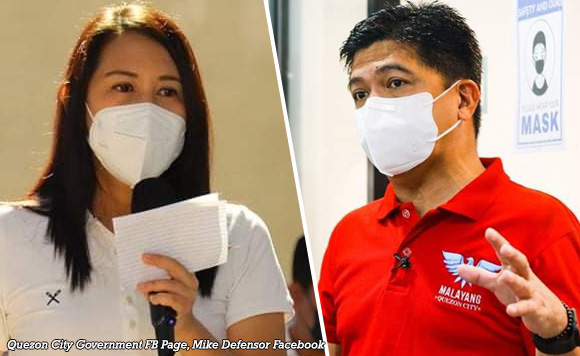 0 843
Share
Want more POLITIKO News? Get the latest newsfeed here. We publish dozens and dozens of politics-only news stories every hour. Click here to get to know more about your politiko - from trivial to crucial. it's our commitment to tell their stories. We follow your favorite POLITIKO like they are rockstars. If you are the politiko, always remember, your side is always our story. Read more. Find out more. Get the latest news here before it spreads on social media. Follow and bookmark this link. https://goo.gl/SvY8Kr

“The complaint is silly and futile because Mayor Belmonte is an elected official, not a private individual. And she knows this,” said Defensor in a statement.

Defensor is running for mayor against reelectionist Belmonte in the May 9 elections.

The filing of the complaints, Defensor said, is an obvious attempt to draw attention and “She is just after the extra publicity at my expense.

Defensor added that the Supreme Court has time and again stressed that elected officials should not be onion-skinned or overly sensitive when it comes to public criticism.

“Like me, Mayor Belmonte is an elected official. We both cannot run away from harsh public scrutiny and disapproval,” Defensor pointed out.

If Belmonte cannot stand public denunciation, Defensor said she should resign as mayor of the city.

“The mayor is just wasting the resources of the prosecutor’s office which has real and pressing cases to deal with,” Defensor noted.

Belmonte’s complaint stemmed from Defensor’s supposed social media posts regarding the deployment of “Baklas army” to take down his posters and overpriced ayuda.

“We would urge Mayor Belmonte to stop her antics, and to respond instead to the criminal complaints for plunder filed against her in connection with the P713 million worth of overpriced ayuda food packs that she bought,” Defensor added.