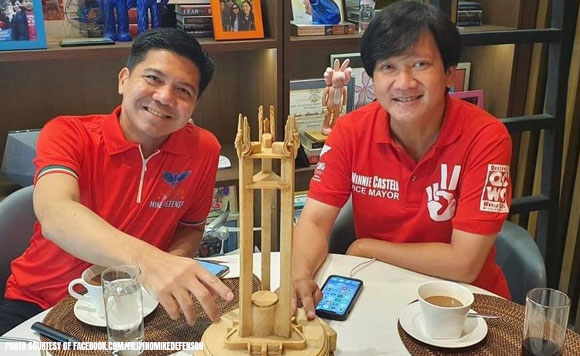 0 2,006
Share
Want more POLITIKO News? Get the latest newsfeed here. We publish dozens and dozens of politics-only news stories every hour. Click here to get to know more about your politiko - from trivial to crucial. it's our commitment to tell their stories. We follow your favorite POLITIKO like they are rockstars. If you are the politiko, always remember, your side is always our story. Read more. Find out more. Get the latest news here before it spreads on social media. Follow and bookmark this link. https://goo.gl/SvY8Kr

With a little over two months before the elections, Quezon City mayoral candidate Anakalusugan Rep. Mike Defensor and his running mate Councilor Winnie Castelo have maintained their lead over their rival.

The Pulso ng Bayan poll conducted by the Issues and Advocacy Center from February 9-15 showed that 51% preferred Defensor to be their next city mayor.

Defensor has maintained more than 50% voter preference since the December survey.

His rival incumbent Mayor Joy Belmonte’s score went down from 39% in January to 34% this month.

Defensor and Castelo thanked Quezon City voters for their continued support not only for them but for their candidates for legislative and other local positions as well.

They reiterated their promise of a proactive, transparent, responsive, and caring city government.

The Defensor-Castelo team’s candidates in four congressional districts have also maintained their big edge over their rivals, while the contest in the two other districts is almost even.

Another reelectionist lawmaker, Rep. Precious Hipolito Castelo of the second district, was chosen by 51%, while Ralph Wendel Tulfo Jr. was preferred by 29%.

Former Rep. Bingbong Crisologo of the sixth district was picked by 52% over his closest rival, Marivic Co-Pilar who has 33%.

In the fifth district, businesswoman Rose Lin who scored 37% was closely behind Patrick Michael Vargas, who has 39%.