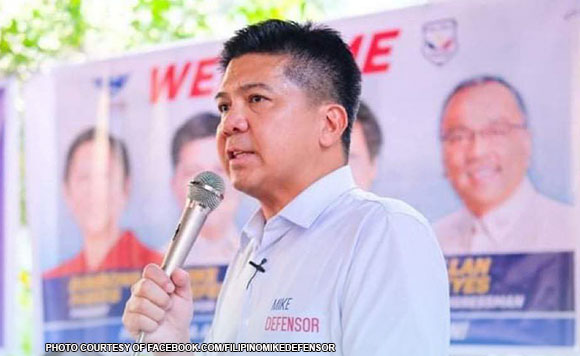 0 2,006
Share
Want more POLITIKO News? Get the latest newsfeed here. We publish dozens and dozens of politics-only news stories every hour. Click here to get to know more about your politiko - from trivial to crucial. it's our commitment to tell their stories. We follow your favorite POLITIKO like they are rockstars. If you are the politiko, always remember, your side is always our story. Read more. Find out more. Get the latest news here before it spreads on social media. Follow and bookmark this link. https://goo.gl/SvY8Kr

To provide students a safe and quiet place to study, Anakalusugan Rep. Mike Defensor on Thursday vowed to open the Quezon City Public Library 24 hours a day, seven days a week, if he is elected mayor of the country’s largest city.

Defensor said the Quezon City Public Library should not be closed to accommodate students who want to concentrate on their studies or in their reviews for their eligibility exams.

“This will be our way of supporting the hopes and dreams of our students,” Defensor added.

At present, the Quezon City Public Library is open only from 8:00am to 5:00pm, Monday to Friday. It is closed on weekends and public holidays.

In contrast, the 24/7 operations of the Cebu City Public Library has drawn national attention for helping to produce topnotchers.

Natu-el posted on social media a photo of him studying at the Cebu City Public Library a year before he would rank No. 2 in the 2018 Bar examination.

Justine Lei Ramos, who ranked No. 1 in the 2019 Architecture licensure exams, also recognized the Cebu City Public Library for giving her space to focus on her review.

Defensor also vowed to improve the internet connectivity in the library to draw in more students looking for a peaceful place to study.

“We will allow students to bring their own food or snacks while they are studying in the library, which will also provide free charging for their laptops, tablets, or mobile phones,” Defensor added.

Defensor also pledged to increase the Quezon City Public Library’s computer stations so that students would not be restricted to just one hour of use.