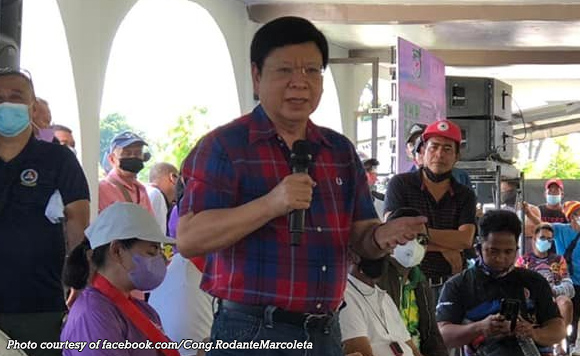 0 152
Share
Want more POLITIKO News? Get the latest newsfeed here. We publish dozens and dozens of politics-only news stories every hour. Click here to get to know more about your politiko - from trivial to crucial. it's our commitment to tell their stories. We follow your favorite POLITIKO like they are rockstars. If you are the politiko, always remember, your side is always our story. Read more. Find out more. Get the latest news here before it spreads on social media. Follow and bookmark this link. https://goo.gl/SvY8Kr

Marcoleta said while opponents are expected to squeeze to the hilt the refusal of presidential aspirant Ferdinand Marcos Jr. to join debates, “it was totally unnecessary for Jimenez, being a Comelec official, to join the fray.”

“Describing the non-participation of candidates in debates as ‘red flag for the people’ smacks of partisanship, to say the least. It is simply not for his office to make such a sweeping judgment,” said Marcoleta in a statement.

The solon said Jimenez should have been the first to know that under the Fair Elections Act (RA 9006) and Section 16 of Comelec Resolution 10730 appearance of candidates in debates is not mandatory whether sponsored by the Commission on Elections (Comelec) or by private entities.

Marcoleta noted that the debates Jimenez was talking about pertains to those yet to be sponsored by the Comelec and not those conducted by the so-called “job interviews” or forums set up by private organizations.

He also pointed out that even the Comelec cannot compel the attendance of presidential candidates in their own fora given the clear provisions of laws.

“For Mr. Jimenez to say that the Comelec ‘will acknowledge that they fail to show up’ or that ‘an empty chair or podium would be set up with the name and face of any candidate who refuses to attend’ is to stretch the intent if the laws toward their unintended purpose,” he added.

Marcoleta said Jimenez should “rectify his statements” and should avoid “giving out his personal opinions when speaking for and on behalf of the Comelec.”

“I do not believe that he is authorized to voice out his views on any issue absent the imprimatur of the poll body. Better still, Jimenez should be more circumspect in making public statements that do not represent the sentiment of the Commission, more so because these will surely be inflated by opposing parties for propaganda purposes—to the confusion and detriment of the electorate,” the senatorial bet added.

In reality, Marcoleta said the main objective of a debate is to entice the undecided voters.

“BBM perhaps believes that his non-participation may no longer be necessary given the small percentage of voters who appear to be undecided, if we believe the latest surveys. Thus, only BBM himself—not Jimenez—who can decide on what is the more prudent action that he should take. He just did,” Marcoleta added.

Colmenares to fellow candidates: ‘We aim to serve our people…