Lacson lauds another honest ‘Ping’ who earns raves from netizens 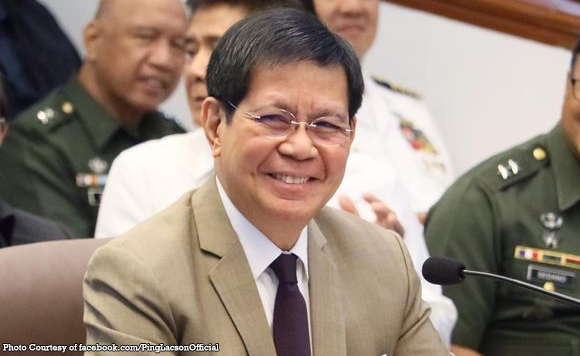 0 338
Share
Want more POLITIKO News? Get the latest newsfeed here. We publish dozens and dozens of politics-only news stories every hour. Click here to get to know more about your politiko - from trivial to crucial. it's our commitment to tell their stories. We follow your favorite POLITIKO like they are rockstars. If you are the politiko, always remember, your side is always our story. Read more. Find out more. Get the latest news here before it spreads on social media. Follow and bookmark this link. https://goo.gl/SvY8Kr

Another “Ping” has caught the eye and earned praise from netizens for being honest and trustworthy, mirroring the traits of Partido Reporma chairman and standard-bearer Panfilo “Ping” Lacson, who joined in lauding his namesake.

Coconut vendor “Tatay Ping” earned the approval of fans on TikTok for passing a social experiment done by vlogger Denso Tambyahero, who was seeking honest Filipinos. In the video, he asked people around him if they owned a wallet he had picked up that had P2,000 in cash in it, without identification cards.

While most people Denso asked claimed they owned the wallet and walked away with it, Tatay Ping told the TikToker: “Hindi po akin ‘yan. Kawawa naman ang naglalagan niyan [That wallet isn’t mine. I pity the person who lost it.]”

This act earned thousands of “hearts” on the social media platform for Tatay Ping, whom Denso surprised by telling the roving “buko” vendor he could keep the wallet and the money for his kind gesture, also to help repair the shambling pedicab and torn umbrella he was using to earn a living.

Lacson also praised his namesake, saying Tatay Ping’s honesty and integrity were the same lessons imparted by his parents growing up from their humble roots in Imus, Cavite. These traits, he said, were the same pillars that the Partido Reporma presidential bet leaned on in over 50 years in public service.

The buko vendor also expressed his surprise over being rewarded just for standing on his principles, telling Denso: “Mahirap mag-ano [kumuha] ng hindi naman sa iyo talaga [It’s hard to claim something that really isn’t yours.]”

[Later on, you might find bad luck (by taking what you don’t own). You don’t feed your children with something that came from wrongdoing… that’s not good, we should learn to live a just life.]

[Of course, I have children, and I don’t think of feeding them with something that I didn’t earn. It’s better to sustain your family from your own labor, even if you earn just a little.]

Netizens who responded to the viral TikTok rode on Tatay Ping’s words and compared it to the current situation leading to the May 9 national elections, with one person with username Aarhiz Hampaslupa saying: “Nice tatay. Sana mga ibang politicians natin ganyan rin mag-isip at hindi nagnanakaw sa kaban ng bayan [Nice, father. I hope our other politicians think the same way and not steal from the nation’s coffers].”

[Tatay (Ping) is afraid to feed his kids with profits from thieving, but others not only feed their kids with it, they also buy their luxuries, then run for President.]

Lacson was definitely not the one alluded to in the last comment as he has prided himself in being the eagle-eyed guardian of the national budget, watching for anomalies in government and living up to the anti-corruption advocacy he started as a soldier and policeman.

That’s why when he became chief of the Philippine National Police, Lacson made sure to remove all “kotong” (bribe-seeking) cops and enforced a “no-take” policy among the police ranks – the same principle he brought to the Senate, where he has refused his yearly “pork barrel” allocations.

As President, Lacson has vowed that his administration will follow through on his campaign mantras: “Aayusin ang Gobyerno, Aayusin ang Buhay ng Bawat Pilipino” (Fix the Government, Fix the Lives of Every Filipino) and “Uubusin ang Magnanakaw” (Get Rid of All Thieves).

♬ You Don’t Know Me – Ofenbach