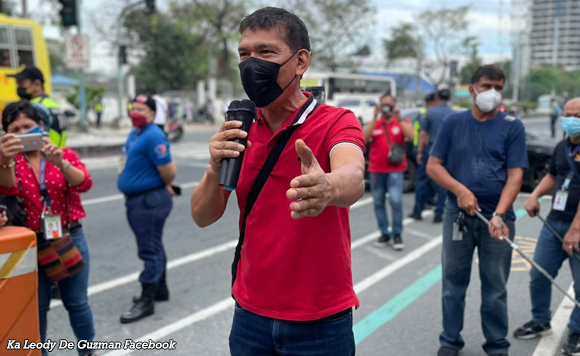 0 133
30
Want more POLITIKO News? Get the latest newsfeed here. We publish dozens and dozens of politics-only news stories every hour. Click here to get to know more about your politiko - from trivial to crucial. it's our commitment to tell their stories. We follow your favorite POLITIKO like they are rockstars. If you are the politiko, always remember, your side is always our story. Read more. Find out more. Get the latest news here before it spreads on social media. Follow and bookmark this link. https://goo.gl/SvY8Kr

In an interview with POLITIKO Monday, De Guzman said he did not expect such support from people.

The Lakas ng Masa standard bearer said this inspired him to fight more actively for workers’ rights and continue his efforts for change.

“Right now only Ka Leody is offering that kind of change – the other candidates are just promising to do better in managing that bulok system,” La Viña tweeted.

“As a citizen of this country, iba ang katapangan na pinakita niKa Leody kanina. I don’t know his background but knowing that he is there with the rest of the candidates,” she said in a Twitter post.