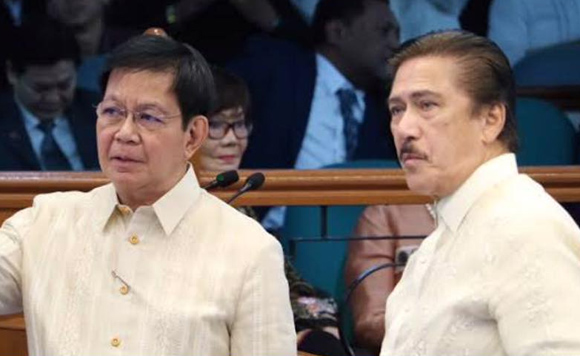 0 360
Share
Want more POLITIKO News? Get the latest newsfeed here. We publish dozens and dozens of politics-only news stories every hour. Click here to get to know more about your politiko - from trivial to crucial. it's our commitment to tell their stories. We follow your favorite POLITIKO like they are rockstars. If you are the politiko, always remember, your side is always our story. Read more. Find out more. Get the latest news here before it spreads on social media. Follow and bookmark this link. https://goo.gl/SvY8Kr

Lacson and Sotto are running for president and vice president respectively in the 2022 Philippine general elections. February 8 signals the start of the official campaign period for every candidate seeking an elective position at the national level in the upcoming May 9 polls.

Cavite is the second vote-rich province in the Philippines with over 2.15 million registered voters and is considered a bailiwick of Lacson, who was born and raised in Imus City. Both he and Sotto were widely successful in securing support from the Caviteños during their previous senatorial runs.

Before taking the Imus Grandstand stage to deliver their political speeches, Lacson and Sotto are set to attend a mass at the Imus Cathedral. Both lawmakers have recently wrapped up their Senate duties upon the adjournment of the third regular session of 18th Congress for the election period.

Around 4,000 Lacson-Sotto supporters and political allies will be present at the gathering, including some of the local government officials of Cavite and nearby provinces, who have already declared unequivocal support for the tandem.

Public health and safety protocols will be implemented at the venue such as social distancing, mask-wearing, and necessary rapid antigen testing procedures on the advice of local government and public authorities amid the prevailing COVID-19 pandemic.

“We will strictly adhere to the Alert Level 2 health protocols in my home province. It is called DISCIPLINE,” part of Lacson’s tweet posted on Sunday evening read, as he confirmed their scheduled proclamation rally this February 8.

Lacson and Sotto are banking on their combined 83 years of public service for their respective electoral bids this year, campaigning on the platforms of good governance and anti-corruption, which have long been part of their advocacies.

Both lawmakers served multiple terms in the Senate for most of their political careers. What sets them apart from their rivals are their wisdom, experience, integrity, track record and competence that make them both ready to solve the pressing, recurring and emerging problems of our nation.

The ultimate goal for the Lacson-Sotto tandem is to restore public trust in a government that would be left in a state of disrepair, as captured in their battle cries “Aayusin ang Gobyerno, Aayusin ang Buhay ng Bawat Pilipino” (Fix the Government, Fix the Lives of Every Filipino) and “Uubusin ang Magnanakaw” (Get Rid of the Thieves).