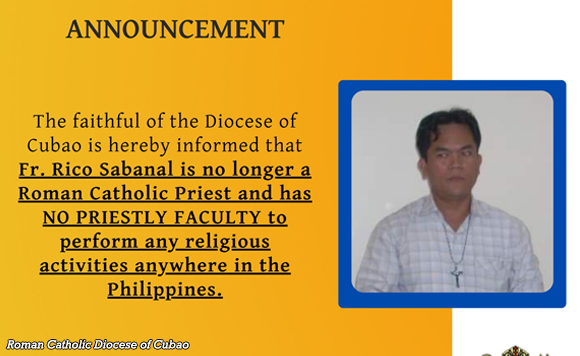 0 676
Share
Want more POLITIKO News? Get the latest newsfeed here. We publish dozens and dozens of politics-only news stories every hour. Click here to get to know more about your politiko - from trivial to crucial. it's our commitment to tell their stories. We follow your favorite POLITIKO like they are rockstars. If you are the politiko, always remember, your side is always our story. Read more. Find out more. Get the latest news here before it spreads on social media. Follow and bookmark this link. https://goo.gl/SvY8Kr

The Diocese of Cubao reminded the faithful that one of its priests has been dismissed.

“The faithful of the Diocese of Cubao are hereby informed that Fr. Rico Sabanal is no longer a Roman Catholic Priest and has no priestly faculty to perform any religious activities anywhere in the Philippines,” reads the Feb. 4 circular issued by Diocese of Cubao chancellor Rev. Fr. Frederick Edward Simon.

“Please refrain from inviting him and inform your parishioners and disseminate this information to Administrator/Officer in-Charge of chapels, funeral chapels, schools, hospitals, government and private offices that are within your jurisdiction,” he also advised.

The Diocese issued the circular after learning that “Sabanal is being invited to celebrate mass in Quezon City Hall Offices, different parishes and chapels within the Diocese of Cubao.”

“Fr. Rico R. Sabanal is a former Carmelite priest who was dismissed from the congregation since August 30, 2008 in violation of Canon 694. The Diocese of Cubao issued circulars dated August 18, 2010 and April 27, 2016 regarding the status of Fr. Rico Sabanal,” Simon said.

Canon 694 states that a priest is dismissed if he “has defected notoriously from the Catholic faith” ot “has contracted marriage or attempted it, even only civilly.”