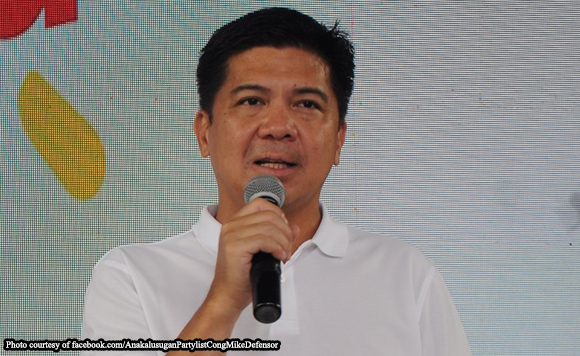 0 1,223
Share
Want more POLITIKO News? Get the latest newsfeed here. We publish dozens and dozens of politics-only news stories every hour. Click here to get to know more about your politiko - from trivial to crucial. it's our commitment to tell their stories. We follow your favorite POLITIKO like they are rockstars. If you are the politiko, always remember, your side is always our story. Read more. Find out more. Get the latest news here before it spreads on social media. Follow and bookmark this link. https://goo.gl/SvY8Kr

Anakalusugan Rep. Mike Defensor has widened his lead over incumbent Mayor Joy Belmonte in the mayoralty race of Quezon City based on the Pulso ng Bayan survey conducted by The Issues and Advocacy Center.

In the survey conducted from December 13-19, Defensor garnered 51% votes way above Belmonte’s 32%. There are 15.1% undecided and 1.9% that will vote for other mayoral bets.

In the Pulso ng Bayan survey done in September, Defensor was preferred by 41% of voters while Belmonte was picked by 27%.

The latest survey was conducted a week after former Sen. Ferdinand Marcos Jr. and presidential daughter Davao City Mayor Sara Duterte-Carpio held a huge motorcade in Quezon City which was organized by the Defensor-Castelo tandem.

Castelo said, “there’s no question voters are embracing Mike as a dynamic leader and problem-solver who can get lot of good things done for the residents of Quezon City.”

“Of course, we are also being buoyed by the fact that we have the support of the most popular presidential and vice-presidential candidates,” added Castelo referring to Marcos Jr. and Duterte-Carpio.

Reyes is preferred by 41% of voters against Councilor Franz Pumaren’s 25%.

In the fourth congressional district, Defensor’s candidate, Councilor Marvin Rillo, is in a virtual tie with reelectionist Rep. Jesus Suntay, with 36% and 39% voter support, respectively.

Suntay is the lone sitting congressman backing the Belmonte-Sotto tandem.

In the fifth district, Defensor supporter Rose Lin and rival Patrick Vargas are also locked in a close fight, at 31% and 33%, respectively.

Quezon City had 1.33 million registered voters in the 2019 mid-term elections. QC is the country’s largest city in terms of assets, population, and voters.