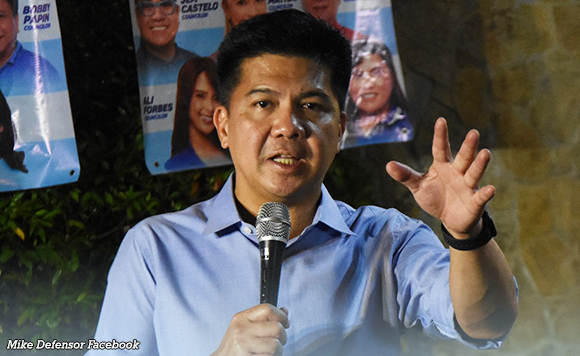 0 1,531
3
Want more POLITIKO News? Get the latest newsfeed here. We publish dozens and dozens of politics-only news stories every hour. Click here to get to know more about your politiko - from trivial to crucial. it's our commitment to tell their stories. We follow your favorite POLITIKO like they are rockstars. If you are the politiko, always remember, your side is always our story. Read more. Find out more. Get the latest news here before it spreads on social media. Follow and bookmark this link. https://goo.gl/SvY8Kr

Anakalusugan Rep. Mike Defensor has called on Metro Manila mayors to deploy mobile booster teams to swiftly cover more people in the ongoing inoculation drive amid the so-called third wave of the COVID-19 pandemic that is being fueled by the highly contagious Omicron variant.

Defensor underscored the need to bring booster services closer to the people to overcome the tsunami of infections and hold back more hospitalizations and deaths.

“In Quezon City, for instance, many residents have not received their boosters because of the local government’s flawed strategy of merely asking people to gather at pre-designated vaccination sites,” said Defensor.

He said transportable booster clinics can be positioned around public markets, where both vendors and consumers are at high infection risk.

“In the case of our vendors, they have to eke out a living every day and are being discouraged from getting their boosters because of poor access,” added Defensor, who is running for Quezon City mayor.

If needed, Defensor said barangay officials should conduct door-to-door campaigns, draw up a list of booster-eligible individuals before bringing in the mobile jab teams.

Defensor also batted for extensive in-home booster services for individuals looking after the elderly or tending to children full-time.

The country is once again at high COVID-19 infection risk, with the National Capital Region (NCR) as the epicenter of a fresh surge in cases, according to the Department of Health (DOH).

Based on the DOH’s COVID-19 Tracker, Quezon City again reported the highest number of new cases nationwide on Jan. 5, with 1,780 cases, followed by Manila with 1,438 cases.