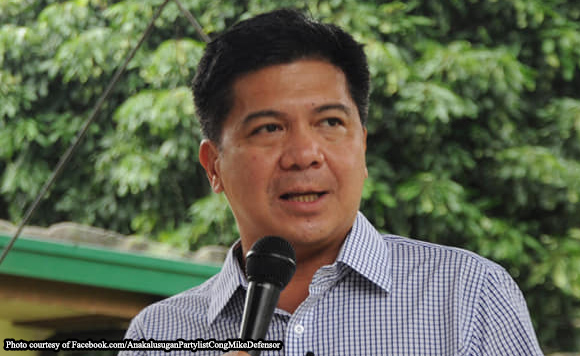 0 204
Share
Want more POLITIKO News? Get the latest newsfeed here. We publish dozens and dozens of politics-only news stories every hour. Click here to get to know more about your politiko - from trivial to crucial. it's our commitment to tell their stories. We follow your favorite POLITIKO like they are rockstars. If you are the politiko, always remember, your side is always our story. Read more. Find out more. Get the latest news here before it spreads on social media. Follow and bookmark this link. https://goo.gl/SvY8Kr

Anakalusugan Rep. Mike Defensor on Sunday said that depositors who lose money due to computer hacking should file formal complaints with the Bangko Sentral ng Pilipinas (BSP) and seek assistance if they are not satisfied with the way their cases were resolved by their banks.

Defensor said the disgruntled bank clients should email the BSP’s Consumer Assistance Desk at consumeraffairs@bsp.gov.ph, or visit the following link:

“The BSP has an administrative mechanism in place to provide remedy to aggrieved depositors who feel that they’ve been treated unfairly by their banks,” Defensor added.

Defensor also dismissed the blanket liability disclaimers in the terms and conditions governing bank accounts as adhesion contracts “that cannot be enforced when depositors lose money under conditions where they are not at fault.”

“If you are a blameless depositor and you lose money because the bank’s computer system got hacked, and illegal transfers were made out of your account, then the bank has no choice but to reimburse your losses,” Defensor stressed.

He said certain provisions of bank adhesion contracts, such as sweeping liability denials, may be voided or disregarded by regulators and the courts, if it is found that innocent depositors lost money because of security breaches in the bank’s computer system.

A post was circulated on social media regarding the BDO Unibank Inc.’s alleged insertion of an all-encompassing liability disclaimer in its terms and conditions after hackers stole funds from hundreds of depositors.

The alleged disclaimer said that bank “shall not be liable for any looses arising from improper or fraudulent access to online banking accounts.”

BDO has denied updating its terms and conditions with the disclaimer, saying the clause has been there “for a long time.”

Blast from the past: Check out Charisse Abalos’ 2009…