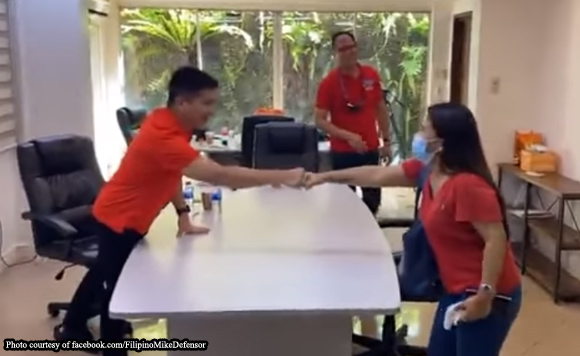 0 1,050
Share
Want more POLITIKO News? Get the latest newsfeed here. We publish dozens and dozens of politics-only news stories every hour. Click here to get to know more about your politiko - from trivial to crucial. it's our commitment to tell their stories. We follow your favorite POLITIKO like they are rockstars. If you are the politiko, always remember, your side is always our story. Read more. Find out more. Get the latest news here before it spreads on social media. Follow and bookmark this link. https://goo.gl/SvY8Kr

A woman who’s a big fan of presidential aspirant Ferdinand Marcos Jr.’s son received an early Christmas gift because her poster got the attention of Anakalusugan party-list Rep. Mike Defensor.

It caught the attention of Marcos and Defensor, who were together during the caravan.

Defensor made efforts to find the woman who turned out to be Dela Cruz, a graduate of Public Administration.

During their meet-up, Defensor contacted Sandro to allow him to talk to Dela Cruz via video call. Dela Cruz cried while talking.

Defensor gifted Dela Cruz with two campaign t-shirts that were signed by Sandro.

One of the t-shirts has a note saying: “Hi Marsy, Thanks for making us all laugh (emoji) Take care always, Sandro.”

Defensor said he will try to arrange a meeting between Dela Cruz and Sandro when the latter is in Metro Manila.