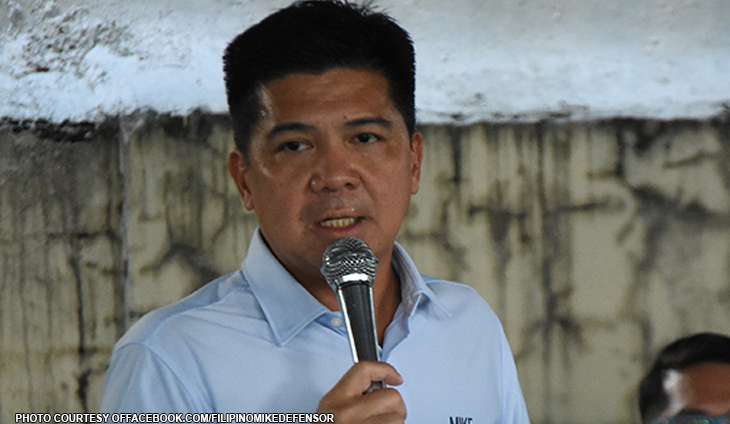 0 1,230
Share
Want more POLITIKO News? Get the latest newsfeed here. We publish dozens and dozens of politics-only news stories every hour. Click here to get to know more about your politiko - from trivial to crucial. it's our commitment to tell their stories. We follow your favorite POLITIKO like they are rockstars. If you are the politiko, always remember, your side is always our story. Read more. Find out more. Get the latest news here before it spreads on social media. Follow and bookmark this link. https://goo.gl/SvY8Kr

Anakalusugan party-list Rep. Mike Defensor has filed a measure seeking to allocate 1% of the local government’s share from the national taxes collected to barangay health-related programs.

Aside from health programs, Defensor said the allocation could also be used to regularize barangay health workers (BHWs) and give them allowances and benefits.

“It is unfortunate that BHWs are only entitled to allowances depending on the Local Government Units (LGUs) concerned. It is but just and equitable that we recognize the contributions of these public servants by specifically allocating 1% of the internal revenue allotment (now called national tax allocation) dedicated to support barangay health-related concerns, including funding for the BHWs’ regular wages, benefits, continuing education and facilities,” Defensor said in the explanatory note of his bill.

Local government units (LGUs) are receiving 40% of the taxes collected by the national government.

Under Defensor’s proposal, 1% of the 40% will be solely dedicated to the enhancement of barangay health-related programs including regularization of barangay health workers, their allowances, and other benefits.