For not allowing the use of Quezon Memorial Circle Defensor: It’s Mayor Belmonte who has political motivation 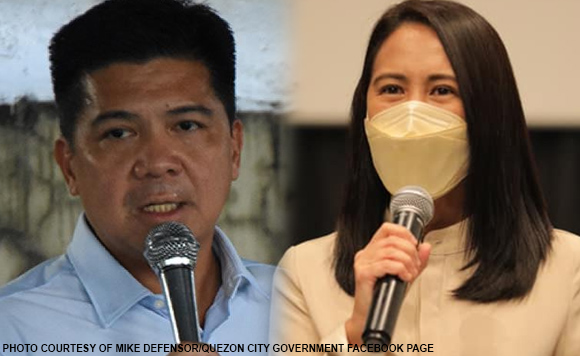 0 1,858
Share
Want more POLITIKO News? Get the latest newsfeed here. We publish dozens and dozens of politics-only news stories every hour. Click here to get to know more about your politiko - from trivial to crucial. it's our commitment to tell their stories. We follow your favorite POLITIKO like they are rockstars. If you are the politiko, always remember, your side is always our story. Read more. Find out more. Get the latest news here before it spreads on social media. Follow and bookmark this link. https://goo.gl/SvY8Kr

Anakalusugan Rep. Mike Defensor said it was Quezon City Mayor Joy Belmonte who has the political motivation in not allowing the supporters of presidential aspirant Ferdinand Marcos Jr., and vice-presidential candidate Davao City Mayor Sara Duterte Carpio to use the Liwasang Aurora inside the Quezon Memorial Circle (QMC).

Defensor was responding to the statement issued by the Quezon City government that his statements were politically motivated.

On November 25, Atty. Ari Ancheta, the chief of staff of Defensor and Malayang Quezon City president Edwin Rodriguez have coordinated with the management of QMC to rent the Liwasang Aurora since they are expecting a big crowd to show support for the Marcos-Sara tandem.

They checked the schedule and were told that no one has reserved the Liwasang Aurora for December 6 to 9. They were planning to hold the event on December 8.

The following day Ancheta received a text message claiming that the city government has booked the Liwasang Aurora for the entire December.

Later they were told to instead use the much smaller basketball court. When Ancheta and Rodriguez went to QMC Administration they were told that political rallies are not allowed in Liwasang Aurora.

Rodriguez argued that Liwasang Aurora has been used for political purposes many times including the Roxas-Robredo rally in 2016. The Belmontes then is part of the Liberal Party.

Defensor said they were not shown an order stating that no political activity can be conducted in the area. He also said that Robredo less than a year held an activity in QMC.

After the incident earned the ire of netizen-supporters of Marcos, Defensor’s camp received a letter saying that they can now use Liwasang Aurora subject to conditions that will be discussed with them.

The Marcos camp has decided not to pursue the use of Liwasang Aurora and instead will conduct a motorcade along Commonwealth and Quezon Avenues. The decision was made even before receiving the letter allowing them to use the facility.

Defensor said it was not made clear to them what they meant by political activity.