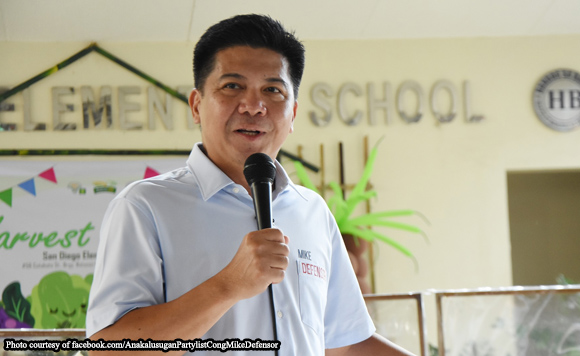 0 720
113
Want more POLITIKO News? Get the latest newsfeed here. We publish dozens and dozens of politics-only news stories every hour. Click here to get to know more about your politiko - from trivial to crucial. it's our commitment to tell their stories. We follow your favorite POLITIKO like they are rockstars. If you are the politiko, always remember, your side is always our story. Read more. Find out more. Get the latest news here before it spreads on social media. Follow and bookmark this link. https://goo.gl/SvY8Kr

Anakalusugan Rep. Mike Defensor is eyeing a P1,000 weekly allowance for poor college students of Quezon City to increase their chance of finishing their baccalaureate degree.

Defensor made the statement as he lamented that only less than 20% of the population of Quezon City were able to finish baccalaureate degree courses.

Defensor narrated that three of his house helpers were able to graduate in college while working in their house.

He said education is important because it can change the status of ones life and family.

Defensor said the local government of Quezon City is capable to helping its poor students especially with its annual budget that is the biggest among the cities in the National Capital Region (NCR).

The Quezon City government has P28.7 billion budget for this year far from Makati City’s P18 billion or Pasig City’s P12 billion. Makati and Pasig have been lauded for providing better medical and educational assistance to its poor residents.