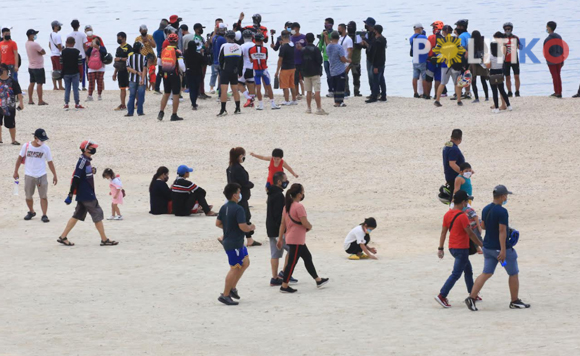 0 905
Share
Want more POLITIKO News? Get the latest newsfeed here. We publish dozens and dozens of politics-only news stories every hour. Click here to get to know more about your politiko - from trivial to crucial. it's our commitment to tell their stories. We follow your favorite POLITIKO like they are rockstars. If you are the politiko, always remember, your side is always our story. Read more. Find out more. Get the latest news here before it spreads on social media. Follow and bookmark this link. https://goo.gl/SvY8Kr

MANILA – The Department of the Interior and Local Government (DILG) on Wednesday said it is undertaking serious efforts to prevent crowding at the Manila Baywalk Dolomite Beach, which reopened to visitors under relaxed quarantine restrictions.

DILG Secretary Eduardo Año made the remark after Malacañang said the possible filing of cases against officials of the Department of Environment and Natural Resources (DENR) as suggested by Manila Mayor Francisco “Isko Moreno” Domagoso’ over the supposed breach of health protocols following the opening of the beach is up to his agency.

Domagoso made the call, saying the overcrowding at the dolomite beach can be a super-spreader event for coronavirus disease 2019.

“(I) have already directed the PNP, particularly the MPD (Manila Police District) under Brig. Gen. (Leo) Francisco to coordinate with DENR (Department of Environment and Natural Resources) and MMDA (Metropolitan Manila Development Authority) the other day to come up with measures to regulate the number of people to be allowed to enter the dolomite beach area,” he said in a message to the Philippine News Agency (PNA).

Reacting to calls to close the beach during weekends, he said this decision is up to the DENR.

“This is a project of the DENR so they have the jurisdiction over this. We leave it to the DENR but as for our part at the DILG, we will support them and help them implement the regulations to prevent super-spreader events at the dolomite beach,” he added.

“As of yesterday (Tuesday), we deployed 100 PNP personnel and we have 50 force multipliers in the area, We started our deployment last October 16, with 38 personnel. The PNP personnel were deployed for Implementation on social distancing and minimum health protocol and to provide security and police assistance in the area,” Francisco added. (with Priam Nepomuceno/PNA)