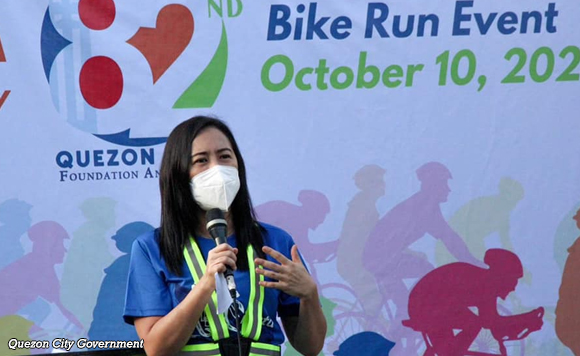 0 56
Share
Want more POLITIKO News? Get the latest newsfeed here. We publish dozens and dozens of politics-only news stories every hour. Click here to get to know more about your politiko - from trivial to crucial. it's our commitment to tell their stories. We follow your favorite POLITIKO like they are rockstars. If you are the politiko, always remember, your side is always our story. Read more. Find out more. Get the latest news here before it spreads on social media. Follow and bookmark this link. https://goo.gl/SvY8Kr

Quezon City Mayor Joy Belmonte presented the bike lanes made by the city government during the cycling activity held on October 10 in celebration of the city’s 82nd founding anniversary.

Mayor Belmonte together with guests, other city officials, and biking groups cycled along the bike lanes from QC Hall, Elliptical Road, up to Commonwealth Avenue and back.

“In Quezon City, we believe that bikers are not second class citizens that’s why we are committed in providing them safe and improved bike lanes,” said Belmonte.

Abalos, for his part, lauded Belmonte and the city government for its successful bike lane network project, and other city-initiated programs.

“I would like to commend Quezon City dahil it’s one of the first LGUs na nagkaroon ng bike lanes sa Metro Manila. And not only that, I would like to congratulate Mayor Joy and Coun. Mikey for sponsoring the active trasport ordinance that for me, should be emulated and adapted by LGUs in Metro Manila,” Abalos said.