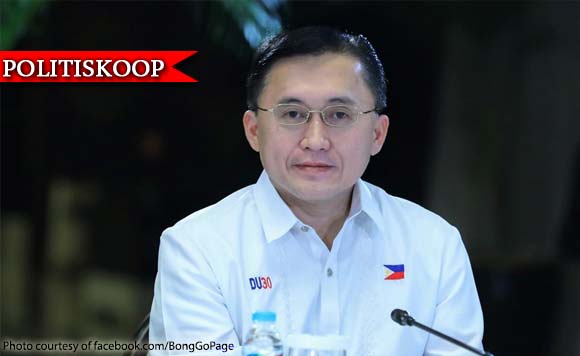 0 634
Share
Want more POLITIKO News? Get the latest newsfeed here. We publish dozens and dozens of politics-only news stories every hour. Click here to get to know more about your politiko - from trivial to crucial. it's our commitment to tell their stories. We follow your favorite POLITIKO like they are rockstars. If you are the politiko, always remember, your side is always our story. Read more. Find out more. Get the latest news here before it spreads on social media. Follow and bookmark this link. https://goo.gl/SvY8Kr

As his poll numbers continue to drop, it seems that administration Sen. Christopher Lawrence “Bong” Go has shifted his end game strategy into survival mode to avert a potential political backlash, the moment President Rodrigo Duterte’s term expires next year.

Politiko learned from Palace and congressional insiders that Go and his confidantes are reportedly in constant communication with the camp of Manila Mayor Francisco “Isko Moreno” Domagoso over a potential alliance between the Davaoeño lawmaker and the Aksyon Demokratiko standard bearer ahead of the 2022 presidential elections.

The sources who all requested anonymity said Go is reluctant to run for president despite the endorsement given by the ruling PDP-Laban party as his ratings continue to plunge in recent pre-election surveys. Go reportedly was forced to change his current priorities and shift to supporting a formidable alternative candidate—like Moreno—who could possibly shield him from future scrutiny and possible charges, especially that some of his former Malacañang subordinates are being dragged by his Senate colleagues in the “Pharmally controversy.”

Go is trailing far behind in recent polls. He ranked 9th in the latest non-commissioned presidential survey conducted by Pulse Asia from September 6 to 11.

The former top aide of the President is reportedly aware of an impending uncertainty in his political career, especially if either Davao City Mayor Sara Duterte or former Sen. Ferdinand “Bongbong” Marcos Jr. will be the one victorious in next year’s race. Go reportedly has been looking for alternative bets that could make him remain relevant in the political arena, even after Duterte steps down from power on June 30, 2022, according to a reliable congressional insider.

The neophyte senator reportedly has already deployed his Senate chief of staff Gelo Villar to the camp of Moreno to assist the actor-turned-politiko in his upcoming presidential run.

Go, through Villar and his team, had invested lots of political capital in the grassroots level during his three-year stint as the President’s top aide, which enabled the former’s successful senatorial run in 2019. Go allegedly used such support in his favor, especially during the peak of the COVID-19 pandemic and until the Pharmally controversy broke out.

With Go’s vast political machinery rallying behind Moreno, it could definitely turn the tide in favor of the Manila Mayor once the campaign season finally starts, according to another source, adding that the former Duterte aide is now playing the so-called “kingmaker” role.

Prior to his stint with Go, Villar worked as a high-ranking political strategist of former House Speaker Alan Peter Cayetano during the latter’s 12-year stint in the Senate.

Villar’s former boss, who is eyeing a Senate comeback, is also reportedly expected to support the presidential bid of Moreno.