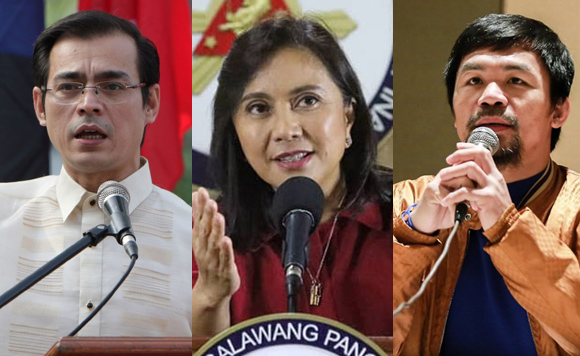 0 1,263
Share
Want more POLITIKO News? Get the latest newsfeed here. We publish dozens and dozens of politics-only news stories every hour. Click here to get to know more about your politiko - from trivial to crucial. it's our commitment to tell their stories. We follow your favorite POLITIKO like they are rockstars. If you are the politiko, always remember, your side is always our story. Read more. Find out more. Get the latest news here before it spreads on social media. Follow and bookmark this link. https://goo.gl/SvY8Kr

Manila Mayor Isko Moreno confirmed on Monday, Sept. 20, that he recently met with Vice President Leni Robredo and Senator Manny Pacquiao ahead of the filing of certificates of candidacy in October.

Moreno, however, was tight lipped about the details of the meeting, saying he wasn’t at liberty to discuss anything.

“I can confirm there was a meeting and hopefully there will be more meetings na pwede namin pag-usapan ang mga bagay-bagay,” he said at the sidelines of the oathtaking of new members of his party, Aksyon Demokratiko.

Moreno, who’s rumored to be eyeing a national post in 2022, however said he’s always ready to listen.

Pacquiao recently declared he will be running for president while Robredo has yet to announce her political plans.