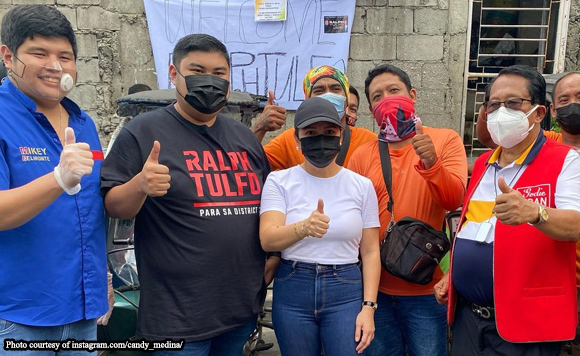 0 188
Share
Want more POLITIKO News? Get the latest newsfeed here. We publish dozens and dozens of politics-only news stories every hour. Click here to get to know more about your politiko - from trivial to crucial. it's our commitment to tell their stories. We follow your favorite POLITIKO like they are rockstars. If you are the politiko, always remember, your side is always our story. Read more. Find out more. Get the latest news here before it spreads on social media. Follow and bookmark this link. https://goo.gl/SvY8Kr

The son of broadcaster Raffy Tulfo is set to enter politics, eyeing the congressional seat in Quezon City’s second district.

Quezon City councilor Candy Medina practically revealed Ralph Tulfo’s plan when she posted a photo of them together on Instagram on Sept. 16.

In a subsequent Instagram post made on the same day, Medina referred to Tulfo as “future cong.”

Tulfo is expected to go against the Castelos in the 2022 polls. Rep. Precious Castelo, the incumbent congresswoman, is the wife of long-time Quezon City politiko, Councilor Winnie Castelo.

Tulfo’s father is rumored to be running for senator while his mother, Jocelyn, is already a congresswoman as the first nominee of ACT-CIS party-list.