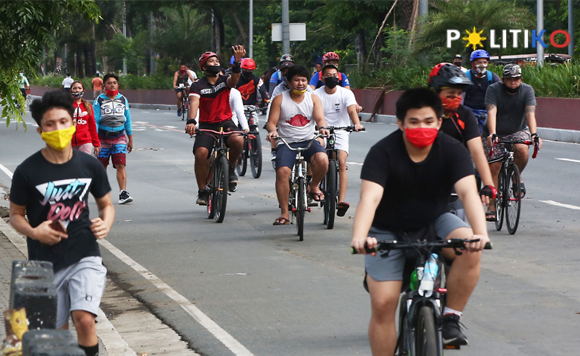 0 337
Share
Want more POLITIKO News? Get the latest newsfeed here. We publish dozens and dozens of politics-only news stories every hour. Click here to get to know more about your politiko - from trivial to crucial. it's our commitment to tell their stories. We follow your favorite POLITIKO like they are rockstars. If you are the politiko, always remember, your side is always our story. Read more. Find out more. Get the latest news here before it spreads on social media. Follow and bookmark this link. https://goo.gl/SvY8Kr

Defensor said the prohibition has “no rhyme or reason or science.”

“It is uncalled for and unreasonable. People, including the elderly, need to exercise even under the strictest of lockdowns because exercise boosts a person’s immunity against sickness,” Defensor said.

Defensor pointed out that even the Inter-Agency Task Force (IATF) against COVID-19 has allowed certain outdoor exercise activities like walking, jogging and biking during the ECQ provided they are done within the vicinity or the barangay.

“The task force recognizes the need for people to exercise within the immediate vicinity of their residences or inside their subdivisions for their own physical and mental health, provided they do not congregate, they do it alone or with others in small groups, and they observe basic health protocols. In fact, that is their right, which our mayors should not take way from them,” Defensor added.

He also pointed out that those infected by COVID-19 cannot go out and exercise based on testimonies of those who recovered from the virus.

“This means that persons who can do walking, jogging or biking are most likely healthy citizens. They are not the virus, they are not carriers and they are not spreaders. The mayors have aimed at the wrong target. That is the problem with our pandemic response,” he said.

Based on the resolution approved by Metro Manila mayors, Defensor said even San Juan Mayor Francis Zamora, who is a biker, would be prohibited from biking around the his residence in affluent Greenhills subdivision.

Defensor called on the IATF to insist on allowing walking, jogging, biking, and similar outdoor physical exertion provided that it is done alone or in small groups within the limits of their subdivisions or streets, and they observe health protocols.