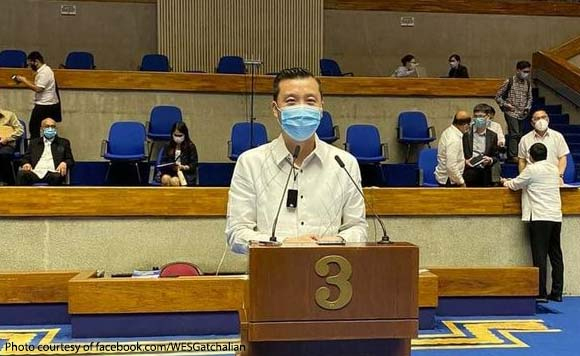 0 1,170
Share
Want more POLITIKO News? Get the latest newsfeed here. We publish dozens and dozens of politics-only news stories every hour. Click here to get to know more about your politiko - from trivial to crucial. it's our commitment to tell their stories. We follow your favorite POLITIKO like they are rockstars. If you are the politiko, always remember, your side is always our story. Read more. Find out more. Get the latest news here before it spreads on social media. Follow and bookmark this link. https://goo.gl/SvY8Kr

Deputy Speaker and Valenzuela Rep. Wes Gatchalian on Thursday said that the Philippine Sports Commission (PSC) should ensure that Hidilyn Diaz and other Filipino podium finishers in the Tokyo Olympics will get their incentives in a timely manner.

“The accolade for the record-breaking medal of Diaz, the first gold for the Philippines in a century, is because of her hard work and dedication. Our athletes have made our country proud and incentives provided to them by law is a token of our gratitude for the honor they bring us, and the PSC should ensure that the incentives for our winning athletes are given in a timely manner,” Gatchalian said.

Under the National Athletes and Coaches Benefits and Incentives Act (Republic Act 10699) all Filipino podium finishers will receive their cash incentives—P10 million for gold, P5 million for silver and P2 million for bronze.

Gatchalian was a co-author of the RA 10699 that was passed during the 16th Congress. He was then the chairperson of the House Committee on Youth and Sports Development that heard and approved the measure.

“Our winning athletes deserve every single peso that is due them. Some of them have even spent their own money just to be able to train for this competition,” Gatchalian added. “These athletes can use the cash incentives they will receive to train for future competitions and to further hone their craft.”

Gatchalian said coaches of winning athletes in the Olympic Games shall also be entitled to cash incentives if they have personally trained the athletes or teams who won at least six months prior to the international competition.

“Let us all support not only our athletes but their coaches as well, who pushed and persevered and won in this games with their protégé.”