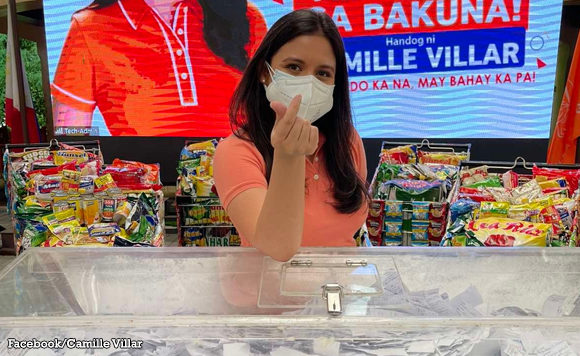 0 403
Share
Want more POLITIKO News? Get the latest newsfeed here. We publish dozens and dozens of politics-only news stories every hour. Click here to get to know more about your politiko - from trivial to crucial. it's our commitment to tell their stories. We follow your favorite POLITIKO like they are rockstars. If you are the politiko, always remember, your side is always our story. Read more. Find out more. Get the latest news here before it spreads on social media. Follow and bookmark this link. https://goo.gl/SvY8Kr

The number of fully vaccinated individuals in Las Piñas has increased by 205%, a month after Deputy Speaker and Las Piñas Rep. Camille Villar launched the May Bahay sa Bakuna incentive program.

“I am so happy and overwhelmed by the response of my kababayans on this program as we ensure to get as many people as possible to get vaccinated,” said Villar.

Villar also noted an increase in the vaccination sign-ups since the launch of the program.

“We are promoting this program not just as a way to incentivize people but also to prevent a surge in cases brought about by low vaccine turnout,” Villar added.

Residents of Las Piñas who received at least one jab in December will get a chance to win a house and lot worth P1.5 million. There are also a number of consolation prizes including two brand new motorcycles.

The city government is also giving away grocery items every month for vaccinated residents.