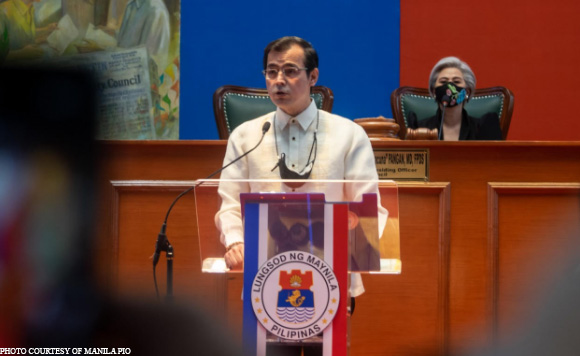 0 740
Share
Want more POLITIKO News? Get the latest newsfeed here. We publish dozens and dozens of politics-only news stories every hour. Click here to get to know more about your politiko - from trivial to crucial. it's our commitment to tell their stories. We follow your favorite POLITIKO like they are rockstars. If you are the politiko, always remember, your side is always our story. Read more. Find out more. Get the latest news here before it spreads on social media. Follow and bookmark this link. https://goo.gl/SvY8Kr

Manila Mayor Isko Moreno hyped the city government’s response to the COVID-19 crisis in his third State of the City Address on Thursday, July 15.

In his speech, Moreno said the city government already came up with a COVID-19 vaccination plan before the spike of COVID-19 cases in the country.

As early as January 5, the Manila City government has already signed a contract for the procurement of 800,000 doses of AstraZeneca vaccines and an agreement for the 400,000 doses of Sinovac was inked on April 28.

“Vaccination should be faster than infection. Vaccination is the solution,” Moreno said, noting that more 600,000 individuals have already received their first dose of vaccine while about 250,000 have already been fully vaccinated.

Moreno said the city government was able to build the Manila COVID-19 Field Hospital ahead of its 60-day target schedule. The 344-bed capacity hospital, he explained, was made in order to decongest the six district hospitals and be able to return to its full function and be able to cater other health concerns.