Masaya driver, operator! Here’s how much gov’t is paying buses for free rides along EDSA 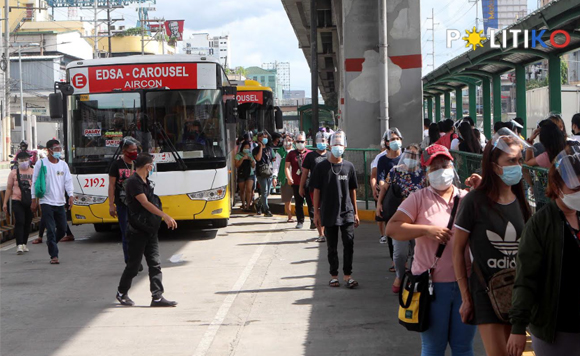 0 44
Share
Want more POLITIKO News? Get the latest newsfeed here. We publish dozens and dozens of politics-only news stories every hour. Click here to get to know more about your politiko - from trivial to crucial. it's our commitment to tell their stories. We follow your favorite POLITIKO like they are rockstars. If you are the politiko, always remember, your side is always our story. Read more. Find out more. Get the latest news here before it spreads on social media. Follow and bookmark this link. https://goo.gl/SvY8Kr

The government is spending around P1.5 million daily to provide free bus rides in EDSA.

During Monday’s hearing of the House Committee on Transportation, Land Transportation Franchising and Regulatory Board (LTFRB) chairperson Martin Delgra said the government is paying P82.50 per kilometer for each bus.

The round trip in the EDSA route from Monumento to Parañaque Integrated Terminal Exchange (PITX) is less than 55 kilometers.

The LTFRB has authorized 550 bus units to ply the EDSA busway but only 428 units were given special permits.

Of the 428 units with special permits, less than 400 are currently running in EDSA. Only 30 passengers are allowed to board each bus.

Delgra said on Wednesday last week the government has already paid P265 million to the operator of the EDSA busway.

Lawmakers were complaining of the long lines of passengers in bus stations in EDSA.

Juliette de Jesus, representative of the Mega Manila consortium operating in the EDSA busway explained that the consortium was unable to complete the 550 units allowed in the routes because they cannot secure new loans from banks to purchase low entry buses, the type of bus allowed to ply the EDSA busway.

She said bus companies were unable to pay their old loans from banks due to the challenges brought by the pandemic. “Hindi po namin nabayaran dahil walang transaction walang operation (noon).”

To solve the problem, Suntay urged LTFRB to allow traditional buses to ply along with low entry buses.

But Suntay emphasized that the use of traditional buses should be temporary.

He explained that the low floor low entry buses are intended for city routes while the coach type is for provincial trips.