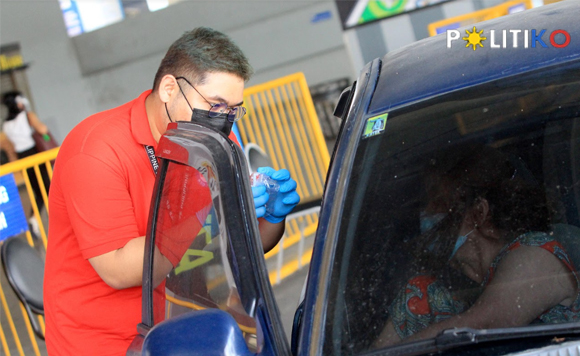 0 143
Share
Want more POLITIKO News? Get the latest newsfeed here. We publish dozens and dozens of politics-only news stories every hour. Click here to get to know more about your politiko - from trivial to crucial. it's our commitment to tell their stories. We follow your favorite POLITIKO like they are rockstars. If you are the politiko, always remember, your side is always our story. Read more. Find out more. Get the latest news here before it spreads on social media. Follow and bookmark this link. https://goo.gl/SvY8Kr

Castelo pointed out that the expected deliveries of millions of vaccines “should be accompanied by a corresponding surge in vaccine rollout so we can immunize and protect as many Filipinos as possible and as fast as possible.”

She said setting up drive-thru or drive-in take-up centers will also encourage people who are hesitant to go to existing vaccinations centers due to fear of contracting the virus from other vaccines or vaccinators.

“It will also ease overcrowding and the problem of parking in these centers,” she said.

Castelo said drive-thru vaccination sites have been effective in the United States that has already inoculated 230 million of its 331 million population.

“We can do that here, in public parks like the Luneta in Manila or Quezon Memorial Circle in Quezon City, in public buildings like the Quezon City Hall parking building, in large government properties like the National Housing Authority complex near QC City Hall and the Batasan compound,” Castelo added.

In Central Luzon, Castelo said vaccine take-up hubs could be set up at the Subic free port in Zambales, Clark special economic zone in Angeles City, and Camp John Hay in Baguio City in Northern Luzon.

Castelo also suggested that the DOH seek the help of volunteer doctors, nurses and other healthcare workers in the expanded vaccination drive.