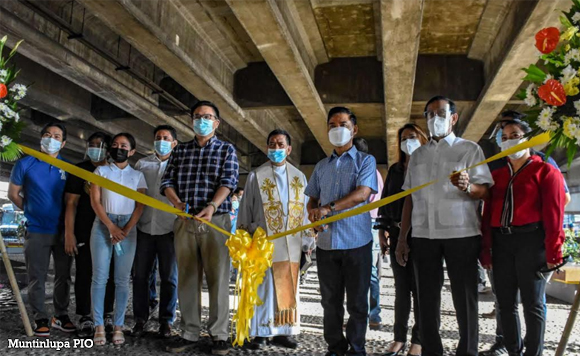 0 65
Share
Want more POLITIKO News? Get the latest newsfeed here. We publish dozens and dozens of politics-only news stories every hour. Click here to get to know more about your politiko - from trivial to crucial. it's our commitment to tell their stories. We follow your favorite POLITIKO like they are rockstars. If you are the politiko, always remember, your side is always our story. Read more. Find out more. Get the latest news here before it spreads on social media. Follow and bookmark this link. https://goo.gl/SvY8Kr

The area under the Alabang Viaduct will no longer be an eyesore to motorists after the Department of Budget and Management, in cooperation with the local government, turned it into a green space.

Muntinlupa Mayor Jaime Fresnedi led on February 24 the inauguration of the first phase of the Alabang Viaduct development under the DBM’s “Green, Green, Green” program.

The newly constructed open space under Alabang Viaduct showcases an iconic sculpture resembling a water lily which is commonly seen near the shore of Laguna de Bay and local tributaries that empty to the lake.

Muntinlupa City Architect Don Causapin, designer of the architectural and interior design of the urban space, said the park’s centerpiece symbolizes Muntinlupa residents’ strength, resourcefulness, and perseverance as water lilies are characterized as resilient plants and able to thrive and bloom no matter the extreme conditions.

The green space will be formally opened to the public on March 1, coinciding with Muntinlupa’s celebration of its 26th cityhood anniversary.