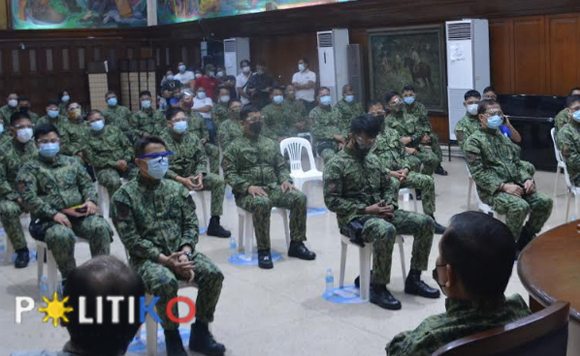 0 224
Share
Want more POLITIKO News? Get the latest newsfeed here. We publish dozens and dozens of politics-only news stories every hour. Click here to get to know more about your politiko - from trivial to crucial. it's our commitment to tell their stories. We follow your favorite POLITIKO like they are rockstars. If you are the politiko, always remember, your side is always our story. Read more. Find out more. Get the latest news here before it spreads on social media. Follow and bookmark this link. https://goo.gl/SvY8Kr

MANILA – The Manila Police District (MPD) has laid out a security plan for the rally of a group pushing for the establishment of a revolutionary government and the adoption of a new federal Constitution.

An estimated 60,000 supporters are expected to attend the rally on Feb. 21 and 22, sparking fears of traffic congestion along Mendiola, Legarda, and other nearby streets.

“Meron na kaming (We have a) prepared security plan on those dates and events. Although IATF (Inter-Agency Task Force) guidelines provide that community assemblies among others are still prohibited in GCQ (general community quarantine),” MPD chief Brig. Gen. Leo Francisco said on Thursday.

Francisco said they have yet to receive a confirmation on the group’s activities but stressed that closing these areas to traffic is part of their contingency plan.

“Worst case scenario maglalagay kami ng (we will set up) chokepoints in every entry point. Naka-deploy na kami (and we will be deploying very) early,” he said.

The “Mayor Rodrigo Roa Duterte-National Executive Coordinating Committee” (MRRD-NECC) has been pushing for the establishment of a RevGov and the adoption of a new federal Constitution.

President Rodrigo Duterte and several top officials have rejected the proposal and opposed the calls of his supporters to declare a revolutionary government.

Presidential Spokesperson Harry Roque earlier said Duterte supports free speech even if the views expressed are against his.

He said pro-Duterte groups pushing for a revolutionary government are free to publicly air their opinion. (PNA)