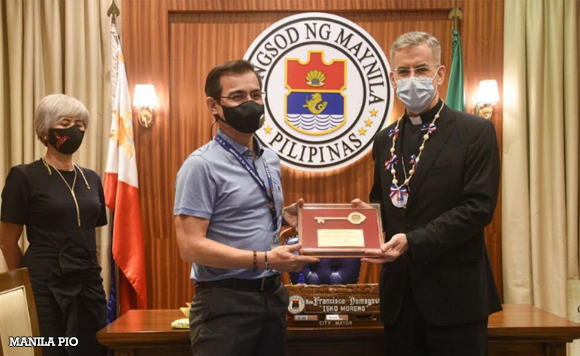 0 87
2
Want more POLITIKO News? Get the latest newsfeed here. We publish dozens and dozens of politics-only news stories every hour. Click here to get to know more about your politiko - from trivial to crucial. it's our commitment to tell their stories. We follow your favorite POLITIKO like they are rockstars. If you are the politiko, always remember, your side is always our story. Read more. Find out more. Get the latest news here before it spreads on social media. Follow and bookmark this link. https://goo.gl/SvY8Kr

Apostolic Nuncio to the Philippines Archbishop Charles Brown was all praises for Catholic believers in Manila for the “vibrancy” of their faith.

Archbishop Brown made the remark as he paid a courtesy call on Manila Mayor Isko Moreno on Monday, February 8.

“It’s great to see the vibrancy of the Catholic faith in Manila. It’s very encouraging,” Brown told the mayor.

The Archbishop said he was also “surprised and delighted” by the progress of the reconstruction of the Sto. Niño de Pandacan Parish which was gutted by fire in July 2020. Moreno donated P700,000 from one of his endorsements last year to rebuild the church.

In response, Moreno said the Archbishop’s attendance to the Sto. Niño de Pandacan feast last January was a “morale booster.”

“We must continue to believe and continue to practice faith across the board because this is the only hope, the anchor of hope for the people,” he said.

Moreno also assured the papal nuncio that the Manila City government will include Church workers in their upcoming vaccination program.