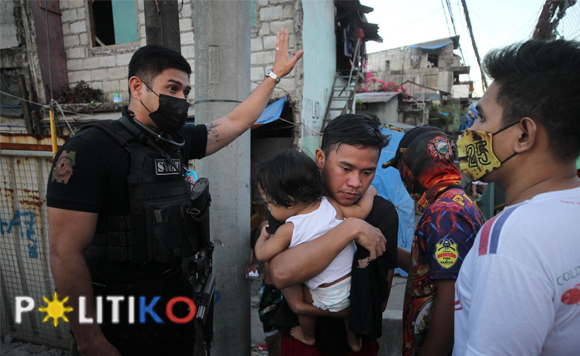 0 129
Share
Want more POLITIKO News? Get the latest newsfeed here. We publish dozens and dozens of politics-only news stories every hour. Click here to get to know more about your politiko - from trivial to crucial. it's our commitment to tell their stories. We follow your favorite POLITIKO like they are rockstars. If you are the politiko, always remember, your side is always our story. Read more. Find out more. Get the latest news here before it spreads on social media. Follow and bookmark this link. https://goo.gl/SvY8Kr

MANILA – A person died while 76 others were hospitalized due to an ammonia leak at a cold storage facility in Navotas City, the Department of Health (DOH) reported Wednesday.

The chemical spill occurred at the T.P. Marcelo Ice Plant and Cold Storage on R-10 North Bay Boulevard South, prompting the evacuation of residents in the area.

The casualty was identified as Mr. Gilbert Tiangco, 44, a security guard at the ice plant who was earlier brought to Navotas City Hospital.

“All residents near the area were evacuated to a certain evacuation center in Navotas. Emergency ambulances are on standby. BFP (Bureau of Fire Protection) contained the ammonia leak,” she said.

Residents are currently barred from returning to their homes following a closure order on the area.

The Bureau of Fire Protection (BFP), meanwhile, continues to secure the facility, but has yet to identify the cause of the leak.

“We’re still waiting for the progress report (of those on the ground) on this incident,” BFP-National Capital Region spokesperson, Fire Senior Insp. Anna Rizza Bancolita-Celoso told the Philippine News Agency.

“Kapag ganito papatayin muna nila ‘yong source ng ammonia dahil may distribution ‘yan sa buong planta, so kailangan nilang i-turn off ‘yong valves at kung saan pa mayroong hazard para matanggal ‘yong spill (In cases like this, they must first turn off the source of the ammonia because there’s a distribution system in the entire facility, so they need to turn off the valves and search for hazards),” she said.

She said this is the second time that ammonia leaked in Navotas.

In a DZMM interview, Mayor Toby Tiangco said he received report of the incident around 4:19 p.m., and a response team from BFP was immediately deployed.

As of 7:12 p.m., the smell of ammonia has subsided, however, it will still take two to three hours to completely eradicate the odor in the facility, the official said. The valve that caused the leak has also been turned off.