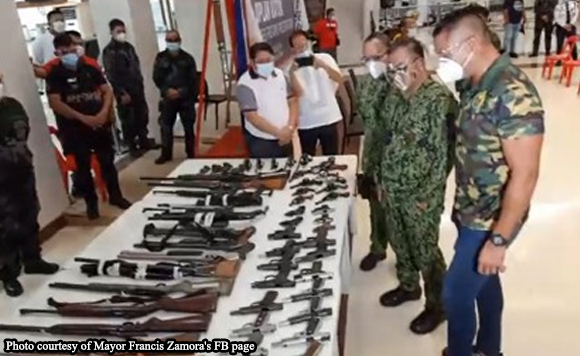 The San Juan police have recovered 85 firearms since January 15 this year from owners who have yet to renew their license, the local government announced Thursday, October 22.

During the presentation of the surrendered firearms at the city hall, Eastern Police District Director PBGen. Johnson Almazan said it was the San Juan police that were able to recover the most number of loose firearms in the district.

“Oplan Katok” is a PNP campaign wherein police personnel go house-to-house to visit firearm holders who have not renewed their firearms license yet, have them renew their permits, or have their guns stored in police vaults for safekeeping.

PCol. Jaime Santos, San Juan City’s Chief of Police, said that the pandemic may have been a reason for some owners for not being able to renew their guns, but they are sending them letters aside from enforcing Oplan Katok to remind them of their responsibility. The renewal will only take a day and so failure to renew rests upon the owner’s hands.

The San Juan Police urges gun owners to renew their firearm’s registration six months before its expiration date to prevent the revocation of registration of firearm and perpetual disqualification from applying for firearm license, pursuant to Section 19 of RA 10591. Otherwise, the licensee should surrender their firearm to the police station with jurisdiction over their residence within 15 days.