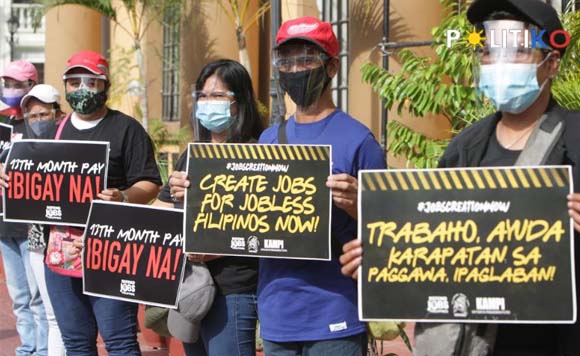 0 159
Share
Want more POLITIKO News? Get the latest newsfeed here. We publish dozens and dozens of politics-only news stories every hour. Click here to get to know more about your politiko - from trivial to crucial. it's our commitment to tell their stories. We follow your favorite POLITIKO like they are rockstars. If you are the politiko, always remember, your side is always our story. Read more. Find out more. Get the latest news here before it spreads on social media. Follow and bookmark this link. https://goo.gl/SvY8Kr

MANILA – Party-list Rep. Alfred de los Santos has called out various employer’s associations over the proposed deferment of the annual 13th-month pay in the private sector amid the socio-economic setback brought by the COVID-19 pandemic.

De los Santos said he is siding for the non-deferral of the 13th-month pay of Filipino workers as the meeting called by the Department of Labor and Employment (DOLE) between stakeholders and labor groups has resulted in a deadlock.

The meeting was called by Labor Secretary Silvestre Bello III, and graced by Trade Secretary Ramon Lopez, Employers Confederation of the Philippines (ECOP) president Sergio Ortiz-Luiz Jr. and trade union leaders, among others.

Bello initially proposed two scenarios—the exemption of “distressed” companies in giving the 13th month pay; and the deferral of other benefits

According to the law, the general rule is that the 13th month pay is mandatory. The only exception provided in DOLE’s implementing rules and regulations (IRR) is when the company is in distress.

However, Bello decided to retract his suggestion and stated during a press briefing that the labor department will not postpone, defer, or give any exemption to the payment of the 13th month pay and subsequent to that Labor Advisory No, 28, Series of 2020 was issued stating that the 13th month must be paid on or before December 24, 2020.