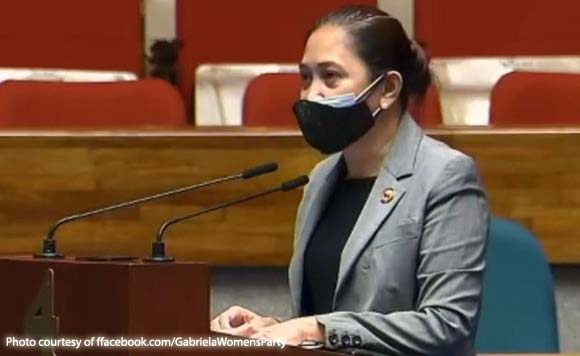 0 62
Share
Want more POLITIKO News? Get the latest newsfeed here. We publish dozens and dozens of politics-only news stories every hour. Click here to get to know more about your politiko - from trivial to crucial. it's our commitment to tell their stories. We follow your favorite POLITIKO like they are rockstars. If you are the politiko, always remember, your side is always our story. Read more. Find out more. Get the latest news here before it spreads on social media. Follow and bookmark this link. https://goo.gl/SvY8Kr

Gabriela party-list slammed the Manila City Jail on October 13 for opposing the three-day furlough granted by the court to political prisoner Reina Mae Nasino to visit the wake and funeral of her three-month old daughter, River.

The Manila City Jail opposed Nasino’s furlough, citing lack of personnel. This prompted the court to have another hearing on October 14.

“This is yet another heartless move from this sadist, tyrannical regime. Reina Nasino had already suffered the absolute most painful thing a human can possibly experience – from getting imprisoned for trumped-up charges to watching your newborn baby succumb to pneumonia from behind bars. How come convicted plunderers and corrupt public officials can easily get out of prison whenever they want while human rights defenders were left to suffer in jail?” Gabriela Rep. Arlene Brosas said.

“We urge the Manila Regional Trial Court Br. 47 to uphold the 3-day furlough for political prisoner Reina Mae Nasino despite opposition from Manila City Jail. The court needs to act now and make the just, humane decision of freeing Reina Nasino and all political prisoners,” she added.

Brosas said Nasino should be allowed to see her child in person for one last time as it has already caused “enough pain” for her and her family.