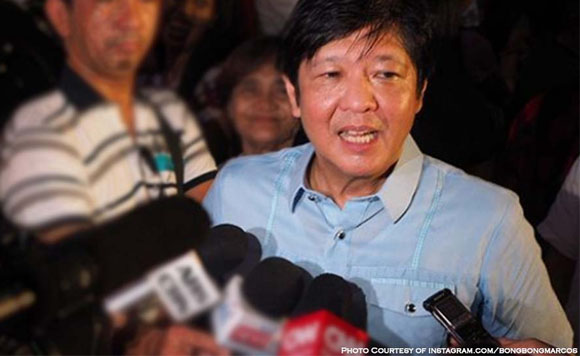 0 62
Share
Want more POLITIKO News? Get the latest newsfeed here. We publish dozens and dozens of politics-only news stories every hour. Click here to get to know more about your politiko - from trivial to crucial. it's our commitment to tell their stories. We follow your favorite POLITIKO like they are rockstars. If you are the politiko, always remember, your side is always our story. Read more. Find out more. Get the latest news here before it spreads on social media. Follow and bookmark this link. https://goo.gl/SvY8Kr

The camp of former senator Ferdinand “Bongbong” Marcos Jr. expressed disappointment that the latest action made by the Supreme Court (SC) justice in charge of his election protest is only contributing to the delay in the issuance of a ruling.

“Considering the very thin time left in the term of the contested position, our protest is under real threat of becoming moot and academic by events leading to 2022 such as the filing of candidacy, campaign and national election that would reduce the clamor and right of the people to know who really won the vice presidency illusory,” said Marcos spokesman Atty. Victor Rodriguez in a statement.

Because of this, Rodriguez said that their camp ”view with extreme reservation the route chosen by the justice in charge.”

“Instead of directly proceeding with the technical examination and forensic investigation he lamentably added another layer that would cause tremendous delay in referring the matter to the Office of the Solicitor General and the Comelec (Commission on Elections) to file their respective Comment,” said the lawyer.

The election protest is currently assigned to Justice Marvic Leonen.

The SC, sitting as Presidential Electoral Tribunal (PET), acted unanimously in issuing a resolution asking the Comelec and OSG for commend concerning the third cause of action in the Marcos protest concerning the annulment of elections in Lanao Del Sur, Basilan and Maguindanao.