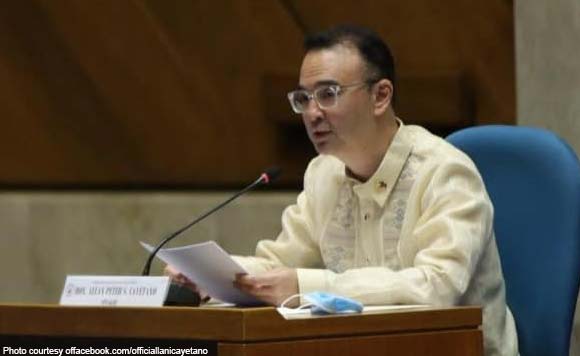 0 68
Share
Want more POLITIKO News? Get the latest newsfeed here. We publish dozens and dozens of politics-only news stories every hour. Click here to get to know more about your politiko - from trivial to crucial. it's our commitment to tell their stories. We follow your favorite POLITIKO like they are rockstars. If you are the politiko, always remember, your side is always our story. Read more. Find out more. Get the latest news here before it spreads on social media. Follow and bookmark this link. https://goo.gl/SvY8Kr

MANILA – The House of Representatives is set to launch a probe into social media giant Facebook’s shutdown of “advocacy” pages that support the government, Speaker Alan Peter Cayetano said on Tuesday.

In a statement, Cayetano said the chamber will investigate the matter after the passage of the proposed 2021 national budget.

“Upon the passage of the 2021 Budget in the House of Representatives, rest assured that we will initiate the appropriate proceedings in aid of legislation to truly determine if the reported actions of Facebook are detrimental to the Constitutional freedom of expression guaranteed to all Filipinos, regardless of political color, rich or poor, left or right,” Cayetano said.

Cayetano slammed Facebook’s “partisan move” as it took down “verified accounts of Filipinos” supporting the police and military while allowing the proliferation of Facebook accounts, pages, and communities that “directly call for the violent overthrow of a democratically elected government”.

In a televised address on Monday night, President Rodrigo Duterte scored the social media giant for taking down accounts and pages advocating “something” that is good for the people.

“I’ve learned in the past days, pati ang advocacy of government tinanggal (was removed), so what is the purpose of you being here. Facebook listen to me. We allow you to operate here hoping that you could also help us also,” Duterte said. “Now, if the government cannot espouse or advocate something which is for the good of the people, then what is your purpose here in my country?”

Duterte said Facebook must explain its “sweeping move” against the Facebook accounts detailing the atrocities committed by the New People’s Army (NPA), the armed wing of the Communist Party of the Philippines (CPP).

One of the pages shut down was the “Hands Off Our Children”, whose advocacy is to prevent minors from being recruited into organizations espousing violent extremism.

Cayetano said while the government always welcomes dissent and protest, “we should and will never tolerate violence and terrorism.”

Duterte had issued a proclamation in December 2017 declaring the CPP and NPA as terrorist organizations, following similar designations by the United States and the European Union.

Cayetano said favoring one sector or ideology, especially one that has been tagged by the international community as a terrorist organization contradicts Facebook’s core purpose of connecting all people globally in a free, open, and neutral marketplace of ideas. (PNA)