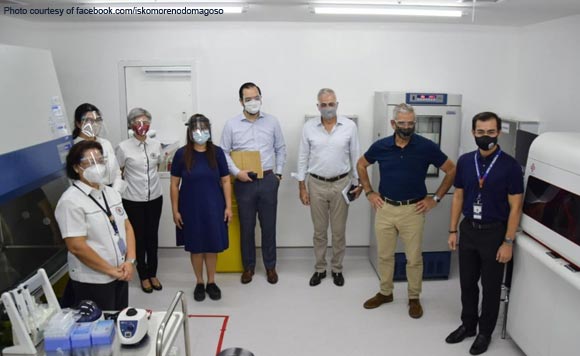 0 79
Share
Want more POLITIKO News? Get the latest newsfeed here. We publish dozens and dozens of politics-only news stories every hour. Click here to get to know more about your politiko - from trivial to crucial. it's our commitment to tell their stories. We follow your favorite POLITIKO like they are rockstars. If you are the politiko, always remember, your side is always our story. Read more. Find out more. Get the latest news here before it spreads on social media. Follow and bookmark this link. https://goo.gl/SvY8Kr

Manila Mayor Isko Moreno has opened a new COVID-19 testing laboratory at the Sta. Ana Hospital, which is capable of processing 1,000 tests daily.

Market vendors will be among those to be prioritized for mass swab testing, Moreno said.

The Ayala Group of Companies has contributed P8.5 million for the construction of the molecular laboratory in support of the Manila City government’s mass testing efforts.

“We were trying to ask for a discount for the construction of the Sta. Ana Hospital. When City Engineer Armand Andres reported back to me, he said the Ayala family will provide a discount—about 100%,” Moreno said as he thanked the Ayala Group for the donation.

While the mayor acknowledged that treating a COVID-19 patient was expensive, he said the Manila City government continues to “shoulder all of the costs” because his constituents “deserve better things from the government.”

“If it’s expensive, pera naman ng taumbayan yan. They deserve better things from the government. Your city government, in our own little way, will not stop serving our fellow Manileños,” Moreno said.

“We support the national government’s efforts to update our testing, tracing and treatment capabilities. While we’re doing what we can to help at the national level, we also believe that supporting local governments is critical,” Ayala said.