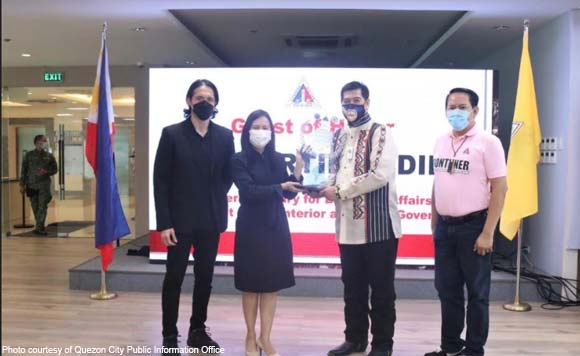 0 55
19
Want more POLITIKO News? Get the latest newsfeed here. We publish dozens and dozens of politics-only news stories every hour. Click here to get to know more about your politiko - from trivial to crucial. it's our commitment to tell their stories. We follow your favorite POLITIKO like they are rockstars. If you are the politiko, always remember, your side is always our story. Read more. Find out more. Get the latest news here before it spreads on social media. Follow and bookmark this link. https://goo.gl/SvY8Kr

Quezon City Mayor Joy Belmonte paid tribute to the 142 barangays at the frontlines of the fight against COVID-19 during the “25th Barangay Day” on Monday, September 21.

In her speech, Belmonte lauded the untiring efforts of barangays to prevent the spread of the virus in their respective communities and to address the needs of their constituents amid the pandemic.

During the event, Belmonte announced the winning barangays in the city government’s “Race to Zero” campaign, which was launched to encourage and challenge barangays to sustain the drop in the number of daily cases in the city through “trace-test-isolate-treat-reintegrate”.

Sikatuna Village, Quirino 3B-Claro and Dioquino Zobel (small barangay category), Sangandaan and Loyola Heights (medium group) and Sauyo and Fairview (large barangay class) were selected after garnering an average of 85 and above, based on the assessment by the City Epidemiology and Surveillance Unit (CESU).

The event also honored various barangay personnel who were infected with COVID-19 while in the line of duty and successfully recovered with the Dakilang Frontliner Award and P10,000 cash aid.

The Bayaning Frontliner Award and P20,000 financial assistance were given to the families of barangay frontliners who perished while doing their job.