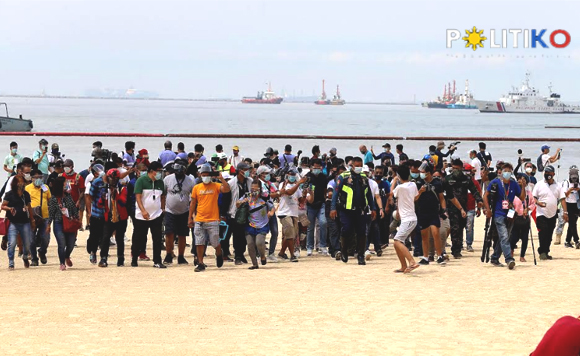 0
37
Want more POLITIKO News? Get the latest newsfeed here. We publish dozens and dozens of politics-only news stories every hour. Click here to get to know more about your politiko - from trivial to crucial. it's our commitment to tell their stories. We follow your favorite POLITIKO like they are rockstars. If you are the politiko, always remember, your side is always our story. Read more. Find out more. Get the latest news here before it spreads on social media. Follow and bookmark this link. https://goo.gl/SvY8Kr

MANILA – Interior Secretary Eduardo Año said he will talk with Environment and Natural Resources Secretary Roy Cimatu after a huge crowd failed to observe physical distancing during the opening of the artificial white sand beach of Manila Bay on Sunday.

He said people are really expected to flock the Manila Bay’s “white beach” made of crushed dolomite.

He reminded the public that Metro Manila remains under the general community quarantine and that they should always follow the health protocols to prevent the spread of the coronavirus disease 2019 (Covid-19).

PNP chief Camilo Cascolan said crowd management is not the sole responsibility of the police.

“I would like to be frank, hindi lang pulis ang may kasalanan dito, lahat po tayo hindi ba. Dapat matuto tayo (it’s not only the fault of the police, all of us should take the blame. We should learn from this),” he said. “We always follow the rule of law and when we follow the rule of law we have no choice, it’s command responsibility and I emphasize command responsibility during my first speech.”

Joint Task Force (JTF) Covid Shield commander Lt. Gen. Guillermo Eleazar said Caramoan could have prevented the quarantine protocol violations at the Manila Bay if there were prior planning and regular monitoring of the situation in the area as well as close coordination with the local government unit.

“Clearly, he also failed to comply with the JTF Covid Shield order that was coordinated with the chief PNP for all police commanders to monitor and immediately take action on violations of the quarantine protocols that are going viral in the social media,” he said in a statement. (PNA)