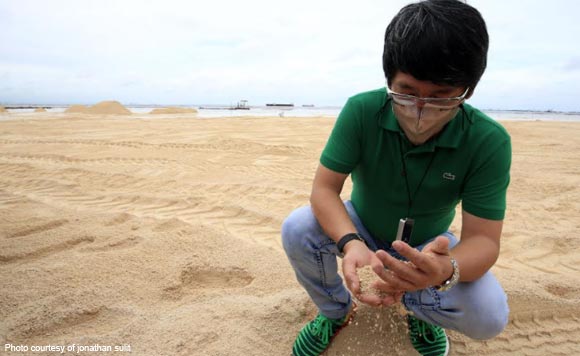 MANILA – The Department of Environment and Natural Resources said the crushed dolomite used in the Manila Bay beach nourishment project is not in any way connected to a fish kill reported in Baseco on Wednesday.

This, after groups that posted a video of floating dead fish in the Baseco area reportedly connected the incident to the dolomite used in Manila Bay.

“Very erroneous yung allegation na yun kasi if you will look at the distance talagang napakalayo and at the same time yung direction ng hangin which is habagat ay hindi nagpo-point sa lugar na yun (that allegation is very erroneous because if you look at the distance, the two areas are very far from each other and at the same time, we have the southwest monsoon which means that the direction of the wind does not point to the area where the alleged dead fish floated),” DENR Undersecretary Benny Antiporda said.

Showing a map, Antiporda said the Manila Bay beach nourishment project is about five kilometers away from the Baseco area where the alleged fish kill happened.

Aside from the distance and the wind direction, Antiporda added that there is a breakwater between the two areas.

He added that the DENR immediately instructed its Biodiversity Management Bureau to conduct an investigation and look at the possible cause of the reported fish kill.

An assessment made by the Bureau of Fisheries and Aquatic Resources (BFAR) that time, he said, showed that poor levels of dissolved oxygen and higher levels of ammonia and phosphates than the standard level caused the incident.

The DENR, he said, is looking at the same possibility.

Another angle being studied by the agency is whether somebody used cyanide for fishing, which Antiporda said, may have caused the fish kill.

“We will check on the water quality first to see if this was not done intentionally or if there was a change in the salinity of the water. We are now looking at the possibilities,” Antiporda said.

Antiporda added that the DENR is also not discounting the possibility that somebody might be trying to sabotage the situation.

“We want to set the record straight but we are not discounting na me mga ganung moves na ngayon, kasi these are desperate moves eh, desperate times eh, eto na lang yung paraan nila para i-discredit yung ginagawa ng gobyerno kaya sa atin naman, nag-iingat din kami, we’re trying to look at all the angles na makita kung ano talaga yung tunay na nangyari (that there may be similar moves. These are desperate times, desperate moves, this is the only way they see to discredit government efforts, so we are also cautious and are looking at different angles so we would know what really happened),” he said. (PNA)

Continue Reading
" DENR Undersecretary Benny AntipordaDepartment of Environment and Natural ResourcesManila Baynsoon which means that the direction of the wind does not point to the area where the alleged dead fish floated)
0
Share
Politiko would love to hear your views on this...
Trending News
More Stories