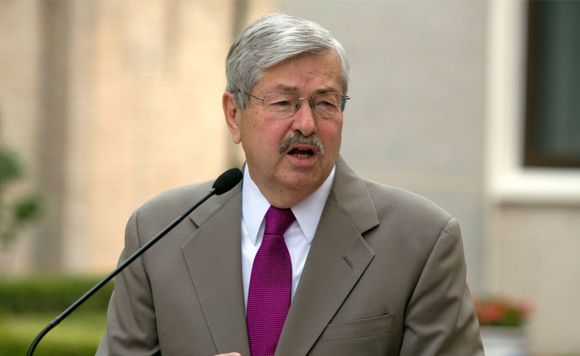 US ambassador to China Terry Branstad is stepping down, Secretary of State Mike Pompeo announced Monday, at a time of increasingly strained ties between the world’s two biggest economies.

Thanking Branstad for his service, Pompeo said in a tweet that he had “contributed to rebalancing U.S.-China relations so that it is results-oriented, reciprocal, and fair.”

In a statement, the US embassy in Beijing confirmed the departure, saying Branstad was retiring and would leave Beijing next month. It added that he had confirmed his decision to President Donald Trump by phone last week.

“I am proudest of our work in getting the Phase One trade deal and delivering tangible results for our communities back home,” the statement quoted him as saying.

It noted his work pushing Beijing to class the powerful opioid fentanyl as a controlled substance, making its sale to the United States subject to China’s maximum legal penalty.

It did not give any details on who would take over at the embassy.

China’s Ministry of Foreign Affairs — while acknowledging Pompeo’s tweet — said it had not received notice of his resignation.

Branstad — who previously served as governor of Iowa for more than 20 years across two spells — has represented Washington in Beijing during a period when tensions with China were heightened over trade, regional territorial claims, the coronavirus pandemic, and unrest in Hong Kong.

In June, he was summoned by Beijing after President Trump signed a law that paved the way for sanctions over Hong Kong, an action the foreign ministry slammed as “gross interference in China’s internal affairs.”

Last year, he called on Beijing to open a “substantive dialogue” with the Dalai Lama during a rare visit to Tibet, a region where the central government is accused of widespread repression.

An early supporter of Trump’s run for the White House in 2016, Branstad was appointed soon after the election.

At the time, Trump’s transition team praised his “tremendous understanding of China and Chinese people.”

He was reported to have a long-standing relationship with Chinese President Xi Jinping, whom he first met in the 1980s. | Agence France-Presse