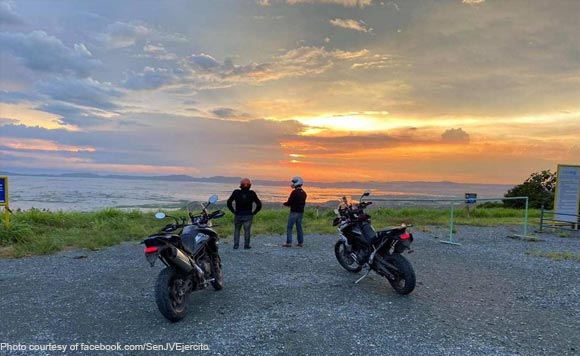 0 75
Share
Want more POLITIKO News? Get the latest newsfeed here. We publish dozens and dozens of politics-only news stories every hour. Click here to get to know more about your politiko - from trivial to crucial. it's our commitment to tell their stories. We follow your favorite POLITIKO like they are rockstars. If you are the politiko, always remember, your side is always our story. Read more. Find out more. Get the latest news here before it spreads on social media. Follow and bookmark this link. https://goo.gl/SvY8Kr

JV Ejercito is getting his TV debut with his motorcycle.

The former senator is loving the adrenaline rush that comes with his two-wheeled vehicle, never mind the injury he’s had to endure before. The best part is that the politiko will be getting some TV exposure as he guests on the show Ride PH of journo Jay Taruc, as the pair went to explore hidden gems in Rizal.

“We started the day riding the awesome Triumph Tiger bikes and went to Pinto Museum in Antipolo. To be honest, I was overwhelmed, surprised and awed by the museum. Had breakfast at Cafe Rizal and toured the museum and appreciated the masterpieces of Filipino artists. The place is also awesome,” Ejercito said.

Their important stop: JE Camp in Tanay, where his dad former President Erap Estrada’s museum is located. “His life and achievements as actor, Mayor, Senator, Vice President and then President are on display. At least the other side of the story specifically the achievements and milestones can be seen,” he added.

Galante! Karina Teh to raffle off TV, phones, cash for…

Gian Sotto’s family opts for general cleaning at home after…