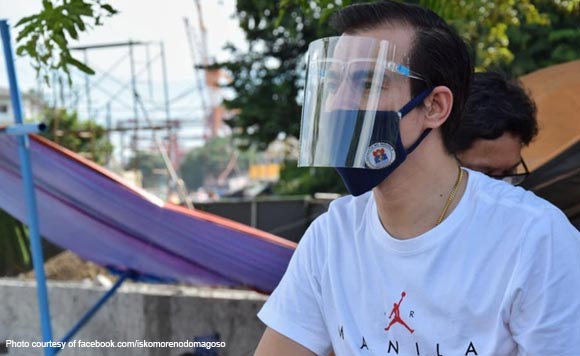 While the crushed dolomite boulders which are placed by the Department of Environment and Natural Resources (DENR) over Manila Bay earned criticisms citing health hazards, Manila Mayor Francisco “Isko Moreno” Domagoso defended the move, saying the department and its officials know what they are doing.

“Our stand is very clear, until particular sand is found pollutive harmful without proper studies, we will support the rehabilitation of Manila Bay,” Domagoso said in an interview at the Kapihan sa Manila Bay on Wednesday.

He said there is a “semblance of regularity” as he does not believe that the agency tasked to protect the environment will be the same organization to pollute it.

He added that the Manila Bay rehabilitation has been long overdue, adding that for over 20 years now, nobody really gave attention to the state of the area once known for its breath-taking sunset.

Domagoso said they passed a very “painstaking” process before the Supreme Court to come up with a mandamus that requires preservation of the bay not only in Manila but all local government units around Manila Bay — which is bounded on the south, facing west by Batangas, Cavite, Paranaque, Pasay and Manila, and on the other side by Bataan, Pampanga, Bulacan, Malabon, Navotas and Manila.

Domagoso said Manila Bay has become so polluted that from the time he took office in July last year up to the present, the Manila Department of Public Service already collected over 3.5 million kilos of solid wastes.

Domagoso said the Mines and Geosciences Bureau (MGB) is very clear in saying if someone inhales the pulverized dust, then it becomes harmful just like an ordinary cement.

“The MBG said it is the dust size which is about 10 to 50 microns that is hazardous if inhaled for a long period of exposure without personal protective equipment. However, the size of dolomite in the baywalk is 2 to 5 millimeters or equivalent to 2,000 to 5,000 microns which is 100 times bigger so this means that this is not suspended in the air,” Domagoso said in a mix of Filipino and English.

Domagoso said the people must continue to believe in the process.

On Monday, Domagoso said he sent a letter to DENR Secretary Roy Cimatu citing a statement made by Department of Health Undersecretary Maria Rosario Vergeire that the inhalation of crushed dolomite rock can cause respiratory problems as it will have an adverse reaction to one’s respiratory system.

In a text message to Domagoso, Cimatu said “dolomite, in its natural state, is not a known health hazard,” adding that it is “not listed by the Mine Safety and Health Assn, Occupational Safety and Health Association, or even the International Agency for Research of Cancer as a carcinogen”.

It added that what is hazardous is the fine silica quartz in some dolomite in the form of dust that is generated during crushing and screening, and not the calcium or magnesium.

Cimatu also said some plantations already used dolomites since 1996, citing that even the well-known Sheraton and Hilton Hotels also used it in their beachfront for over 20 years and has not caused any problem.

Cimatu added that some public beach in the country using dolomite is in Dalaguete, Cebu that for the last six years, no issues or complaint have been raised. (PNA)Walang pruwebang masama: Isko Moreno backs dumping of white sand on Manila Bay shore