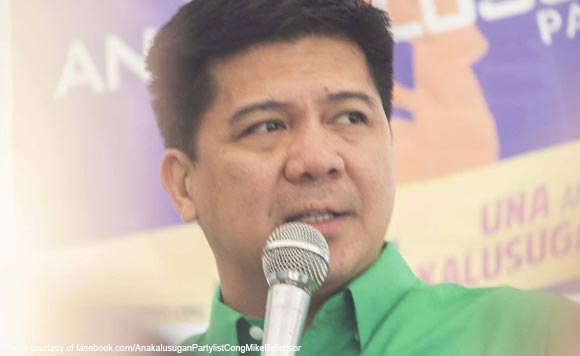 0 99
537
Want more POLITIKO News? Get the latest newsfeed here. We publish dozens and dozens of politics-only news stories every hour. Click here to get to know more about your politiko - from trivial to crucial. it's our commitment to tell their stories. We follow your favorite POLITIKO like they are rockstars. If you are the politiko, always remember, your side is always our story. Read more. Find out more. Get the latest news here before it spreads on social media. Follow and bookmark this link. https://goo.gl/SvY8Kr

“Considering their great wealth, the Lopezes can easily opt to convey their common shares in ABS-CBN to its employees, who can then report a change of control and seek a new broadcasting franchise from Congress,” he said.

Defensor, chair of the House public accounts committee, said the Lopezes and the employees of ABS-CBN “should consider engaging the services of investment bankers who might be willing to arrange the share transfer.”

He said ABS-CBN’s current market value of P12.7 billion implies that only some P6.4-billion worth of common shares would have to be assigned to effect a change of control.

“Assuming the Lopezes divested from ABS-CBN, they still effectively control at least four other publicly traded corporations with a combined market value of roughly P136 billion as of July 17,” Defensor said.

“We’re actually talking here of severely depressed stock market prices due to the economic fallout from the pandemic. A year ago, the four listed firms, without counting ABS-CBN, were worth over P800 billion,” Defensor said.

“Let’s say the Lopezes beneficially owned just a little over 50 percent of the common shares of the four listed firms since they are in control, they still have leftover assets valued at more than P400 billion a year ago and currently worth P68 billion,” he said.

“We also understand they still have a residual four percent equity stake in Manila Electric Co. that is easily worth another P11.5 billion at market prices,” Defensor said.

Defensor also mentioned the Lopez family’s privately held interests in cable TV and Internet services as well as filmmaking for theatrical exhibition, among others.