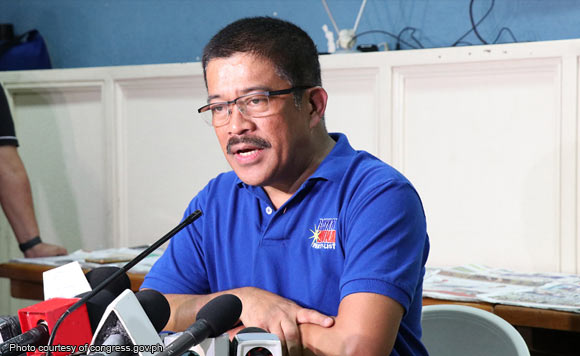 0 77
957
Want more POLITIKO News? Get the latest newsfeed here. We publish dozens and dozens of politics-only news stories every hour. Click here to get to know more about your politiko - from trivial to crucial. it's our commitment to tell their stories. We follow your favorite POLITIKO like they are rockstars. If you are the politiko, always remember, your side is always our story. Read more. Find out more. Get the latest news here before it spreads on social media. Follow and bookmark this link. https://goo.gl/SvY8Kr

Bayan Muna party-list Rep. Carlos Zarate on Thursday urged his colleagues in the House of Representatives to withdraw their “yes” vote to the Anti-Terrorism Bill or simply abstain if they wished to be on the right side of history.

“I call on my colleagues who voted yes to withdraw their votes and instead vote no or just abstain because if not they may come down in history as the enablers of an era worse than martial law in our country,” Zarate said.

He made the statement as protests mounted against the bill following its approval on third reading by a divisive 173-13 vote with 29 abstentions on Wednesday night.

One of the principal authors, Muntinlupa Rep. Ruffy Biazon, disowned the bill and voted no, arguing the House should have allowed amendments instead of copying the Senate version in toto.

Deputy Speakers Loren Legarda and Vilma Santos-Recto also denied co-authoring the bill even though they were initially named co-authors in the committee report.

Zarate said the bill makes it easy for President Rodrigo Duterte through the Anti-Terrorism Council to “simply arrest rallyists by merely alleging that a militant protest action has the intention to ‘cause harm to others.’”

“The Duterte government has a long track record of ‘reinterpreting the law’ according to their interest. By practically restating the problematic definition of terrorism, and punishing the supposed intention according to the discretion of the police, the safeguard provisions are rendered inutile,” he warned.