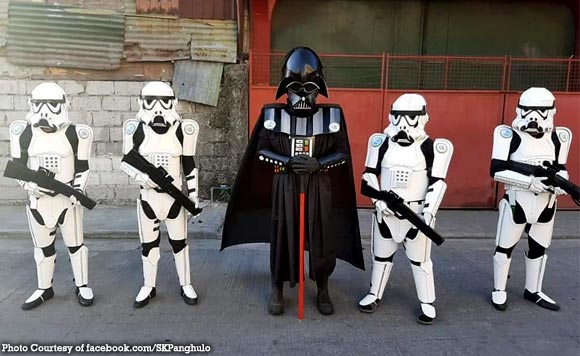 A Philippines suburb is getting help from a galaxy far, far away to enforce its virus lockdown — Darth Vader and a retinue of stormtroopers, whose patrols are drawing smiles from locals weary of weeks of quarantine.

Three times a week, members of a local youth group don their homemade Star Wars outfits to do their rounds of Panghulo in the capital Manila to remind people to stay in their homes to help halt the contagion’s spread.

On one patrol, AFP saw Darth Vader striding into a silent courtyard followed by the white-armoured stormtroopers holding blaster rifles and scanning for anyone breaking the lockdown order that has confined the city’s 12 million people to their homes since mid-March.

Another mission saw them being rowed through the flooded streets on the lookout for those sneaking outside, dodging the electricity lines that sagged overhead.

“We made the costumes… to ease the stress and worries of children and their families,” said Alexandria Ignacio, one of the group’s members.

The locals are happy to see something new in the deserted streets — even if it is the Empire’s feared stormtroopers.

“We want them to continue,” said local Loida Lumagas. “We also need a little amusement.” (AFP)